Share All sharing options for: Piece on Earth: Phillies 2, Marlins 1 (10)

Cliff Lee and the Phillies took a 1-0 lead into the ninth inning on a cool, windy night at Citizens Bank Park. Phillies hitters had smashed high fly balls into the outfield, some of which would have landed in the seats on different nights, but fell harmlessly into the Marlins' outfielders' grubby gloves. The Phillies sole run in regulation came on a John Mayberry home run, a line drive screamer to left that didn't have enough elevation to get blown down.

Oh, but Cliff, you were magnificent, accumulating 12 strikeouts with two outs into the ninth and running an 0-2 count to Jose Lopez. You grooved a cutter. Lopez swung and didn't miss. Oof. The ball found its way to the seats in left, tying the game at one run apiece.

After the Phillies failed to score in the bottom of the ninth, Michael Schwimer was brought in, and worked a perfect tenth inning, striking out two.

The bottom of the tenth was quick and painless. Burke Badenhop issued a leadoff walk to Michael Martinez, a sign of trouble ahead if there ever was one. Ryan Howard pinch hit for Schwimer, brought into the game in the top of the 10th as part of a double switch, lined a 3-1 pitch into the left-center gap, scoring Martinez with ease and ending the game.

Cliff Lee's insurgent Cy Young Award candidacy may have received a killing blow tonight, you see, because he didn't get the "Win." Because all his teammates decided that it was too hard to hit in this wind. Stupid Cliff, motivate your hitters better.

The Phillies Magic Number is two.

Fangraph of Better Late Than Never 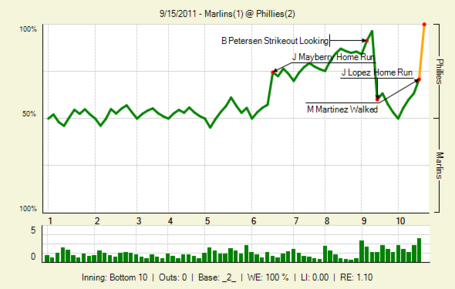