Share All sharing options for: Fine, Be That Way: Cardinals 4, Phillies 2 (11)

There's really no reaction to tonight's game other than "Ew." The game was just not great. In just so many ways. Vance Worley labored through six innings, giving up one run on six hits and three walks. He had five strikeouts, four of which were looking. Worley has 108 strikeouts on the season now, 59 of which were looking. He worked out of some jams, but threw a lot of pitches in a short amount of time. He also walked in a run. It was a confusing outing. Jaime Garcia was doing that thing where he's good again, allowing five hits and one run over seven innings. He restricted his hits to just two innings -- the second and the seventh.

No, the starting pitching wasn't tonight's story. A combination of crappy offense and bullpen issues ruled the evening. The Phillies left the bases loaded in the second inning, and left Chooch on base in the seventh and the ninth. The Cardinals outhit the Phils 14-7 tonight. That's twice as many. Twice. Albert Pujols had four hits. If I counted correctly, that's only three fewer than the entire Phillies offense got all night. Rollins, Victorino, Utley, and Pence went a combined 0-for-18. But Ryan Howard, last night's walk-off hero, came through once again with his second pinch hit double in as many nights, which tied the score in the bottom of the ninth. The "hit parade" came to a screeching halt after that, at least for the Phillies. They went quietly in the tenth, and despite a one out single from Polanco in the eleventh, John Bowker lined out to end the game. Bowker is still looking for his first hit as a Phillie, though at least this time he didn't strike out.

Antonio Bastardo is beginning to show some wear and tear, which is most assuredly a mental issue and in no way related to anythiing physical. The word "tired" actually has two meanings. While many think it means "my arm doesn't have the same strength it did several months ago, and I can't find the strike zone with a map, a floodlight, and several large signs", it actually means "I am afraid of success." Bastardo's doubt in himself gave up an eighth inning solo home run, which put the Cardinals up 2-1. Perhaps Madson's closer mentality needs to have a talk with Bastardo's fear of winning.

The bullpen was playing with fire all night, and I'm starting to think that Herndon is trying to kill poor Fuqua. In the seventh, he gave up one hit and two wild pitches, but got himself out of a one-out, bases loaded jam by inducing a double play. I don't even know what to do with that. Lidge pitched around two hits in the ninth, and Madson dealt with Theriot in scoring position for most of the tenth. But the hammer came down on Michael Schwimer in the eleventh. He allowed a lead off double to Furcal, and then the go-ahead run scored on a single hit by Adron Chambers, who is apparently a player on the Cardinals. You learn something new every day!

So the Phillies must try again tomorrow to win the NL East crown. It will be German Heritage Night at the ballpark, complete with a beer garden. No matter the result of tomorrow's game, I'm pretty sure most people will end up drunk. 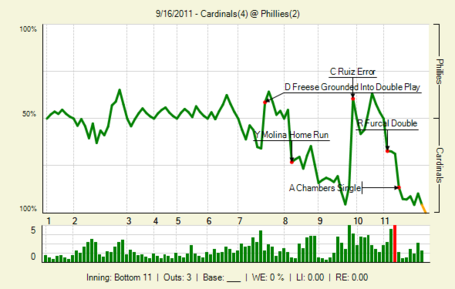