The only real downside to the run of astonishing success that the Phillies have enjoyed these last few years is that there's some risk of becoming desensitized to just how friggin' great it is to watch the ballclub win and win and win. Tonight's win, which featured close to everything special about the 2011 Phillies, was a great reminder of just what a treat it is to follow this team in the hands-down greatest era of its long history.

In a year when the team has seen three starters mount credible Cy Young Award candidacies, it's only appropriate that starting pitching was key in the clincher. Facing a potent Cardinals lineup, Roy Oswalt threw seven shutout innings, holding St. Louis to five hits and striking out seven. Oswalt again gave hints that he can be a force in October, keeping the Cards off balance relying mostly on a low-90s fastball that featured sharp movement.  It was the fourth straight start and fifth in his last six in which Li'l Roy worked more than six innings.

He left with a 3-0 lead as the Phils scored single runs in the first, fourth and sixth innings. Hunter Pence plated Jimmy Rollins with a two-out double for the first tally, and Shane Victorino accounted for the next two with a bases-loaded walk, which chased starter Jake Westbrook, and a solo homer. But the Cardinals hung around as the Phils left multiple runners on in the first, third, fourth and fifth innings.

Those missed opportunities loomed large when Oswalt gave way to Michael Stutes in the eighth. The rookie reliever retired the first two hitters he faced, but gave up four straight singles to Jon Jay, Albert Pujols, Lance Berkman and David Friese that brought St. Louis within a run at 3-2. Charlie Manuel emerged to wave in Brad Lidge, and the hero of the 2008 championship run needed just one pitch to induce an inning-ending groundout from Allen Craig.

The Phillies put the game away with six runs--roughly equaling what they'd scored in the previous week--in the bottom of the eighth. Carlos Ruiz led off with a hard grounder that Daniel Descalso couldn't handle for a two-base error, and advanced to third with one out on Rollins' single, his fourth hit of the game. Victorino followed with a sharp single up the middle that stretched the lead to 4-2. After Chase Utley was hit by a pitch from Marc Rzepzinski, pitcher number six on the evening for the Cards, to load the bases, Ryan Howard struck out. Octavio Dotel came in as the seventh Cardinals moundsman on the evening--is there anything more exciting than watching LaRussa go back and forth to the mound multiple times in an inning?--to face Pence, who chopped a grounder to Rafael Furcal at shortstop. Furcal looked at second, where Utley was already at the bag, then fired to first... a split-second too late to get Pence, as Rollins scored the fifth run. Implausibly, LaRussa left the righty Dotel in to face Raul Ibanez--and watched as the 39 year-old left fielder yanked a Dotel offering out of the yard to right for a grand slam that capped the scoring.

Ryan Madson worked around a two-out single to finish things off in the ninth, and the celebration began. The win itself featured contributions both from the guys who've been around for the bulk of the run--Rollins with four hits, Victorino with three runs batted in, Lidge and Madson securing the last four outs--and relative newcomers Oswalt and Pence, who inevitably found himself in the center of the champagne freakout in the clubhouse, sans goggles. Here's hoping he has a few more such events to enjoy over the next six weeks or so. 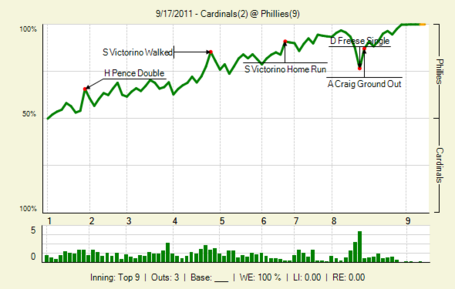