Once Cole Hamels finished his warmup pitches, he performed pretty well in the game after the Phillies clinched their fifth straight NL East title, going seven innings and striking out nine. Unfortunately, that didn't happen until the fourth batter he faced in the Cardinals' top of the first inning, by which time Hamels had surrendered a lineout, a double, and a majestic two-run homer to Albert Pujols. Behind eight shutout innings from ace Chris Carpenter, that was all St. Louis would need in an eventual 5-0 win that brought the Cardinals within 3.5 games of the stumbling Braves in the NL wild card race.

Allen Craig added two later homers for the Cardinals, a two-run shot off Hamels in the sixth and a solo off Joe Blanton in the eighth. Justin De Fratus made his major league debut for the Phils, pitching a scoreless ninth. Not much else of note from this one: the Phils had eight hits, all singles, and repeatedly hit into double plays to squash a couple modest proto-rallies. Chase Utley did have three of those hits.

Back at 'em tomorrow in the series finale as Roy Halladay looks for win number 19. Fangraph of meh: 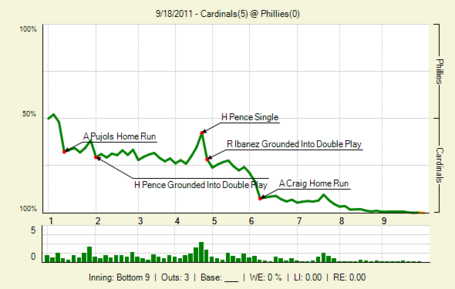