Share All sharing options for: Lance Berkman and the Death of the Oddly Impressive Four-Game Series Streak: Cardinals 4, Phillies 3

Perhaps ex-Astros, as long as they are facing the Phillies, wake up to smell the morning air in late September and feel a certain lift in their step, as if icy cold champagne were getting poured down their backside, that inspires them to mas macho feats of hitting and plate appearing. Or maybe that same champagne, before - or - dare I think it? - after such a pouring, contains magical multi-day hangover power. Or maybe Ryan Howard's mere presence scares the bejeezus out of the Cardinals.

Speculate all you wish in the comments below, but the other reality is that Phillies, after doing the honors themselves to clinch their division title, are, as of this writing, delegating the responsibility of clinching home-field advantage throughout the playoffs to the Cubs. And, to be fair, the Cardinals are on a tear, and like Winfield Scott's legions of yore, are smelling the blood of crippled Braves in these late-season playoff swamps.

But speaking of unpleasant things stuck in your backside, Lance Berkman punctuated his season-long sodomization of Phillies pitching with a 2-hit, 2-walk, 2-RBI performance, and was the main villain in tonight's loss. The Cardinals thus  not only prevented Roy Halladay from winning his 20th 19th game of the season, but also snapped the Phillies' oddly impressive season-long four-game series unbeaten streak.

Alas, while there are neither flags nor parades for such statistical feats, it was nevertheless shaping up to be a sure-fire "true or false" bar bet Phillies trivia winner when the dust-mite-length American memory fades from this season in a couple of years. And, if you read blogs like these, you were probably pulling for them to do it. O wells.

Phillies starter Roy Halladay wasn't quite himself, but then again, neither was the strike zone. The four walks were uncharacteristic, but so too were things like a two-out walk to old buddy Nick Punto followed by a double to Albert Pujols that stretched the Cardinals' lead to 4-1. Halladay wound up striking out six and pitching eight innings; David Herndon pitched a scoreless ninth, a moderate bright spot that concluded with a three-pitch strikeout of Pujols.

The offense sputtered as well, but showed more life than on Sunday night. Phillies batters failed in clutch situations, stranding ten runners. Whether the inning was the third, during which Raul Ibanez and Placido Polanco struck out with the bases loaded against other old buddy and Cardinals starter Kyle Lohse, or the fourth (Victorino grounded out to first with two on), or the fifth (Ibanez lined out to Lohse, who doubled off Hunter Pence), there was nothing much doing.

Then the ninth rolled around, notable for two milestones: first, a left-handed pinch hitting appearance by someone not named Ross Gload or John Bowker (Brandon Moss -  who struck out), and an RBI triple by Jimmy Rollins, his 100th career such hit. Rollins knocked in Carlos Ruiz, who had doubled to lead off the inning, and then came home when Shane Victorino grounded out on the first pitch to pull the Phillies to 4-3. After a Chase Utley single and Mensa-like gyrations by Cardinals manager Tony LaRussa, Hunter Pence grounded out against other other old buddy Arthur Rhodes to end the game.

Shortly after the game ended, the Phillies were not the only team to suffer from Oldbuddyitis, as Omar Infante, down to his last strike, hit a walk-off home run in Florida against the Braves' vaunted Back End of the Bullpen(TM) to cut their lead to 2.5 games and welcome Wild Card Fever to the National League race as well.

And don't forget to tie a string around your iPhone. Tomorrow the Phillies play a day-night doubleheader against the Nationals. First game at 1:05, with Prodigal Starter Kyle Kendrick on the mound against Ross Detweiler. 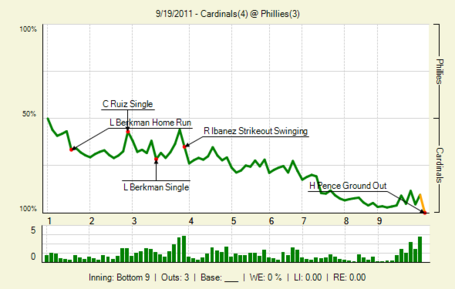