Who Would Buy That? Raul Ibanez: Fashion Designer Edition

Share All sharing options for: Who Would Buy That? Raul Ibanez: Fashion Designer Edition

I know I'm not alone in thinking that baseball players are pretty rad. They do things I never, ever could (and not just because I'm a chick). I'd trust them to give me advice on how to hit a baseball, field a pop-up, or throw a fast ball. I'd even trust some of them to teach me how to work a runway. But I would not ask them for advice about fashion. And yet MLB merchandising lets players design their own gear for purchase by the fans. This week and next week I'm featuring several pieces of Phillies Signature Series apparel and asking Who Would Buy That? This week, I'm featuring Raul Ibanez's valiant yet misguided efforts at designing a t-shirt.

I can see why MLB Merchandising came up with this idea. I mean, in theory, it's pretty fantastic. Fans always want more from their favorite players, so why not have those players design something that fans can buy (at a premium price) and wear on their person? The problem with that brilliant idea is that most baseball players are...well, baseball players. They've been playing baseball. I assume that their wives/girlfriends/mistresses dress them, or they buy clothes that look "cool." I have an image of Shane Victorino in my head, doing what a six year old would do in the Herald Square Macy's: running around and picking out the stuff that looks the most bad ass. (It's the only explanation for how he ends up wearing so much Ed Hardy/Affliction, because that stuff is retina searingly ugly.)

So with baseball players being athletes and not graphic designers or fashionistas (fashionistos?), this concept is already in the red. When you add to that the limitations of traditional MLB apparel, it's like you've pulled your hammy during pregame warmups. The game hasn't even started and you're rolling around on the field because you accidentally ran too hard. I'm saying that this project was pretty much made for me to ridicule. 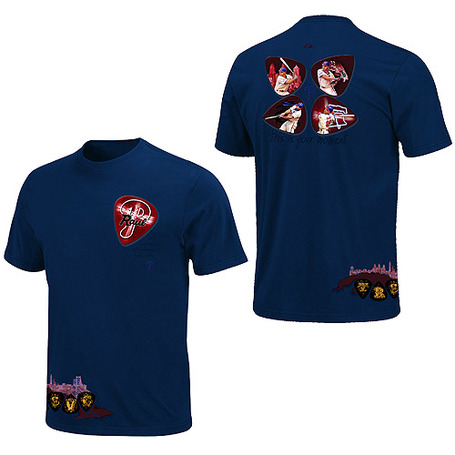 That brings me to Raul Ibanez's Player's Choice Signature T-Shirt. The short write up of the shirt starts with "Raul loves guitars." What I really think they mean to say is Raul loves guitar picks, because that is what's featured prominently on this shirt. First, the good things (or, thing): I really like the color. The dark blue is a departure from the normal Phillies colors, and you don't see a lot of baseball t-shirts with that color. Of course, this is barely a baseball t-shirt, and beyond the color, there's a whole lot of strange happening. The front of the shirt features a large red guitar pick over the heart of the wearer, with the Phillies P outlined in white, "Raul" written across it in black, and a star burst coming from the center of the P. So, Raul likes guitar picks, the Phillies, his own name, and nonsensical graphic adornments. I feel like I know him better already! If you magnify the image, you can see that underneath the guitar pick, there's a quote from Raul: "You always have to prepare as if something extraordinary is about to happen." I'm assuming he doesn't mean striking out constantly or being put into a left field platoon with a career minor leaguer and native first baseman. There is also a small, blue Phillies P underneath the quote, because the giant, star bursty P wasn't enough.

The back of the shirt has four guitar picks with images of Raul inside them. Each image showcases a part of his swing. Image 1: Raul stands at the plate, ready to swing, with the red-tinted Philadelphia skyline behind him. Image 2: Raul begins to swing, and the power of his swing is so great the disturbance of air is visible to the naked eye. Image 3: Raul is fully extended, but strangely there is no baseball anywhere in the image, so it looks like he's flailing at nothing. Image 4: Raul has completed his swing, with the liberty bell outlined in neon beside him, and one of those star bursts to give the whole thing a little zazzle. In the center of the four guitar picks is the blue Phillies P, and below them is the phrase "this is your moment." Adding to the list of things Raul likes: himself, his swing, cliches.

Apparently, putting guitar picks in the traditional t-shirt graphics locations wasn't enough. Raul wanted more, so he decided to use the bottom right side of the shirt to put more...stuff. There are five small guitar picks wrapping around the bottom right side of the shirt featuring the initials of his wife and four children. As a backdrop to his guitar pick family is Cuba (his native land, according to the write-up). The island is in a dark brownish-red, and sitting on top of it is what I first thought was just a purplish scrawly pattern. After looking at the magnified image, I can see that it's probably the skyline of some part of Cuba, but it's really a toss up. The whole section of the shirt has such a nice sentiment, but it's the odd placement of the design, and its inherent ugliness, that makes the shirt completely unwearable. (As opposed to ironically wearable, which the giant, self-worshiping guitar picks accomplished on their own.) To finish out the list of things Raul likes: his wife, his children, more guitar picks, Cuba, more nonsensical graphic adornments.

So, who would buy this? Imagine, if you will, a man in the midst of a midlife crisis. He looks at his life and says, out loud, to his mirror "You've sold out. You've become The Man." He spends hours remembering the band he had in college, the Rebel Friars. "Yeah, those stuffy Catholic college administrators HATED that name!" he yells at his desk in the middle of a work day, leading to a mandatory psych evaluation. He grows his hair out, not caring that it's a bad look for a man who is mostly bald. He calls up his old band mates to suggest a reunion. "Of course they're all too busy, they're working for THE MAN!" he mutters while trying to remember how to make an F chord on his old guitar. When he goes to Phillies games now, hangs out with teenagers, yelling "THEY MATCH MY INNER AGE!" as he's escorted out by stadium security yet again. While he's trying to sneak back in through the stadium store, he sees the guitar pick on the shirt and is immediately drawn to it. "Raul Ibanez likes guitar -- just like I do!" He shaves his head and starts keeping a giant wad of chewing tobacco in his cheek. "Raul knows what it's like to struggle!" he writes on a pad of paper after being rushed to the hospital when a giant wad of tobacco blocked his airway. He writes a song for Raul called "Brothers of the Soul" and refuses to take the shirt off until Raul listens to it. "IN PERSON!!" he demands in the Youtube video he uploads. He's committed to an insane asylum three months later after being discovered completely naked and living in an overgrowth of bushes by the Holiday Inn Stadium, treating the Raul t-shirt like a baby.

You can buy this t-shirt at the reduced price of $16.97, down from $21.99. By wearing it, you'll get to experience hardships just like Raul, only with him it's baseball, and with you, it'll be getting anyone to take you seriously while wearing this ridiculous shirt.