How the Other Half Loses: Phillies 5, Marlins 3

Share All sharing options for: How the Other Half Loses: Phillies 5, Marlins 3

There was a time when I loathed and feared the Florida Marlins. Say the names Juan Pierre and Luis Castillo in the same sentence, and I'll flinch like someone's about to punch me--because those two speedy little bastards did, repeatedly, in 2003. Jeff Conine's brief stint with the 2006 Phillies was morally wrenching for me; for years I had to be restrained from kicking old guys who look like Jack McKeon--and let's face it, a lot of old guys look like Jack McKeon.

But watching tonight's game, between a Phillies team headed for its greatest regular season ever and cruising toward a playoff spot and a Marlins club buried in last place, missing signature players Hanley Ramirez and Josh Johnson, and playing in front of a few thousand fans at most--among whom, by the sound of it, about half were cheering for the Phils--in an utterly charmless stadium made for football, I realized I have absolutely no hate for the Marlins right now; just pity. It has to be sheer misery playing for that team, and a whole other level of existential horror to follow them as a fan.

Losses like tonight's won't help much, though a determined optimist could find something positive in the performance of 21 year-old rookie lefty Brad Hand.  After allowing a leadoff triple to Shane Victorino, who came around to score on a Placido Polanco sacrifice fly, Hand didn't surrender another hit until the fifth. That hit, though, was a two-run homer by John Mayberry, Jr, which followed an Emilio Bonifacio error that had put Hunter Pence on first. The bomb gave the Phillies a 3-2 lead that they didn't relinquish; Mayberry drove in another run an inning later on a sacrifice fly, and after Florida pulled within 4-3 in the bottom of the sixth, the Phils added another in the seventh after a sequence of Marlins miscues. Victorino led off the inning with a single and went to second when Mike Stanton couldn't field the ball cleanly. He moved to third on a Polanco groundout and scored on a Ryan Webb wild pitch.

A week after beating Roy Oswalt in Philadelphia (and possibly reopening the Oswalt-vs.-Vance Worley debate concerning the playoff rotation), the Marlins looked like they might smack around Li'l Roy again in south Florida. Five of the first seven Marlins hitters reached base, and they tied the score at 1 in the first when Bonifacio scored on a Greg Dobbs double play. Florida went ahead 2-1 in the third when Omar Infante led off with a double and scored on Stanton's groundout two batters later. From then on, though, Oswalt found a groove, retiring nine straight until Jose Lopez homered with two outs in the sixth to make it 4-3. He finished the night with seven strikeouts in his 6.1 innings.

The bullpen did the rest, with Michael Stutes, Antonio Bastardo and Ryan Madson recording the last eight outs. The win brought the Phillies to 88-46 on the season, putting the team 42 games over .500 for the first time in the team's 129 year history. Meanwhile, the Marlins absorbed another defeat on the way to another losing season, waiting with hope and impatience at the new stadium in which they'll take residence next spring, and from which they'll attempt to again merit hate and despair on the part of other teams' fans. 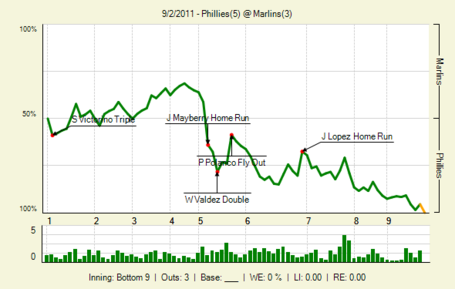