Share All sharing options for: The Kids Are Almost Alright: Nationals 4, Phillies 3 (10)

It was the Phillies first truly meaningless game of 2011, and the starting lineup showed it. Shane Victorino and Hunter Pence constituted the entirety of the regular starting lineup for game one of today's doubleheader, but it was one of the regulars, in a pinch hit appearance, who contributed most with the bat.

The Nationals did their biggest damage on the day on a two out three-run homer from Roger Bernadina off rookie reliever Michael Schwimer in the seventh. The Phillies returned the favor in the bottom of the seventh on a three-run Raul Ibanez blast, his 20th of the season.

Also notable: the Major League debut of former first round pick Joe Savery, who allowed a leadoff single to Chris Marrero and retired the next hitter on a sacrifice bunt.

The score would remain tied at 3-3 until the top of the 10th, when the regressing-like-crazy Mike Stutes issued two two-out walks (one intentional after a passed ball), followed by an RBI single to Ryan Zimmerman, making the score 4-3.

The Phillies would threaten in the bottom of the 10th after a leadoff double from nice Mennonite boy Erik Kratz, the starting catcher. Despite an epic 10 pitch at-bat by Pete Orr that ended in a line drive out, the Phillies failed to move Kratz off second, allowing Drew Storen to close out the game.

It's really hard to get disillusioned by the struggles of the Junior Varsity Phillies, although I really would like this team to win 102 games. Just because.

Tune in tonight for CLIFF LEE. 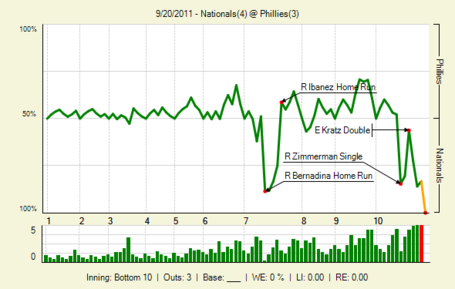