There was no one thing to blame for tonight's loss. Different parts of the lineup performed (sucked) in different ways. Vance Worley turned in another less than great outing, going six innings and giving up four runs on six hits with three walks and six strikeouts. All of his runs came via the home run. In the eighth, Justin De Fratus hit Danny Espinosa with a pitch (hahaha) then walked the next batter, so he was pulled before he could do any further damage. But then he gave way to Antonio Bastardo, he of low self confidence and four-days rest. Bastardo allowed both of his inherited runners to score on a throwing error (his own, that'll help the self-esteem) and a single. And then he gave up another run and a hit, as if we weren't already freaked out enough.  The hitting was also pretty atrocious. Rollins, Victorino, Polanco, and Utley went a combined 0-for-16 with two walks. All of the damage was done by the lower half of the batting order.

There were a few good things. Both Joe Blanton and Michael Schwimer turned in scoreless innings, which their respective ERAs sorely needed. Schwimer also showed off a nice move to first, nearly picking off pinch runner Brian Bixler. Brian Schneider would subsequently catch Bixler stealing second. Five straight singles in the bottom of the second had the score tied 2-2. Raul Ibanez plated John Mayberry, Jr. in the third, which was the go-ahead run. At the time. Mayberry also jacked a two-run homer (his 15th) in the eighth which brought the Phillies to within two. Mayberry went 3-for-4 on the night, as did Ben Francisco. Vance Worley even went 1-for-2 with an RBI.

Both Ryan Howard and Hunter Pence sat out tonight. Pence could be seen in the dugout, talking John Bowker's ear off and looking distinctly awkward and out of place. It's easy to tell how much he really, really hates not playing. He is miserable on the bench.

It's really super not fun to watch the Phillies play like this. But the games? They're completely and utterly meaningless. And it's not like we're the only ones that know that. The players know that as well. I want them rested and healthy for the playoffs. And things in baseball can turn on a dime. Just as fast as the faucet turned off, it can be turned on again. If you don't believe me, take a look at the Wild Card races. 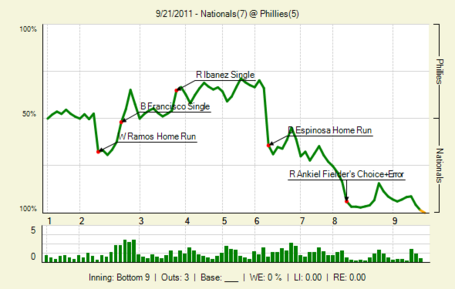