Another split-squad Phillies team, another loss to the Nationals closing out the home portion of the Phillies' regular season. The Washington Nationals won 6-1, completing a four-game sweep, the first sweep of three or more games the Phillies have suffered all season.

We can keep hashing out the whole "these aren't the real Phillies" arguments and "no playoff team will have Pete Orr, John Bowker, and Ross Gload in the starting lineup" stuff, and those would be correct, smart things to say. But it's really dreadful baseball to watch.

We've been fans of this team for years now, it's a veteran roster that knows how to play and what's important. Let's just hope they remember all that stuff starting next weekend. One of the big problems with an aging roster is the tendency to, you know, age, and get tired late in the season.

Details? Roy Oswalt looked good to start out, allowing two runs in the third with two outs, thanks in part to another "Chase Utley doesn't trust his right fielders" play, nearly colliding with Bowker and allowing an Ian Desmond pop-up to fall in for a double. Desmond would then score on a Roger Bernadina single. Those two runs would be all the Nationals would need, as Brian Peacock flummoxed the Phillies lineup, allowing just one hit and lots of fly ball outs in 5 2/3 innings pitched.

The Phillies scored their sole run in the bottom of the ninth, after a two out double from John Mayberry and a Carlos Ruiz single.

The Phillies head to Queens for a three game weekend series with the Mets. 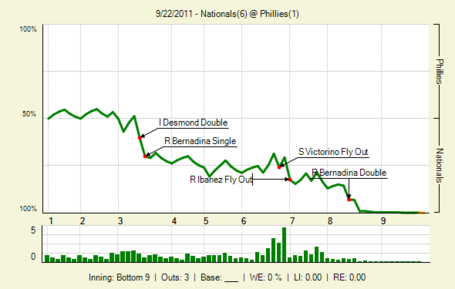