So. I know there's little to no correlation between September performance and playoff results, and these games are meaningless in the grand scheme of things, but damn if this team isn't a drag right now.

R.A. Dickey held the Phillies hitless for six innings before the Phillies broke through for three hits and a run in the seventh, but quickly saw the lead disappear when Cole Hamels, who had a good start by nearly all accounts, surrendered Val Pascucci's first major league home run in seven years in the bottom of the seventh. Hamels overall went seven innings, striking out seven and allowing three walks and four hits, and left the game with the score tied 1-1. The Phillies were unable to score again, and the Mets plated a single run in the eighth off Brad Lidge to take the 2-1 lead.

Into the ninth, Manny Acosta quickly retired Shane Victorino and Ryan Howard for the first two outs, only to surrender a base hit to Raul Ibanez and a full count walk to John Mayberry. Carlos Ruiz proceeded to fly out to center, ending the game, and extending the Phillies losing streak to seven.

See you back here tonight. Barf. 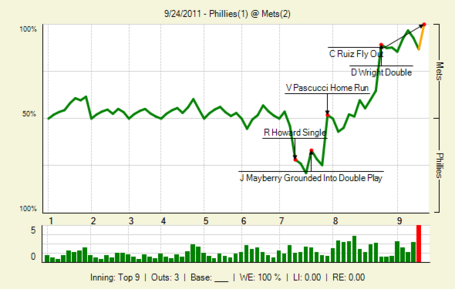