Share All sharing options for: Almost Over: Mets 6, Phillies 3

This is kind of amusing now. The Phillies lost yet again--their eighth straight game. At first it looked like things might be turning around when the Phillies loaded the bases with no outs in the top of the first, but then it looked like more of the same when Hunter Pence grounded into a double play and nary a run was plated. But then things appeared to be turning around again when the Phillies pushed across three runs in just two innings to jump out to an early 3-0 lead. But then it looked like more of the same again when Hunter Pence botched a relatively routine two-out flyball that allowed two runs the score. The worst part wasn't the runs, actually, but the fact that it allowed the inning to continue. A David Wright walk, a Nick Evans double, and a Josh Thole single later and the Phillies were down 5-3. All-in-all, a five-run error for Mr. Pence. Banner effort for him tonight.

According to the boxscore, the Phillies didn't score again. But actually I didn't watch after the Mets took the lead.

The Phillies are playing really crappy baseball right now and it's really frustrating to watch, it can't be denied. However, the sheer improbability of losing eight games in a row suggests that this is a fluke. Even if the Phillies suddenly and mysteriously turned into a really terrible team immediately after clinching, the chances of them losing eight games in a row are extremely small.

Probably the worst part of this whole ordeal is that it has brought out the most stereotypical negadelphian traits in a number of fans. Look, as I noted earlier this week, teams that have lost a lot towards the end of the regular season have won in October and teams that have gone into the playoffs on a hot streak have lost too. It's just how the playoffs work. Unfortunately, it appears that this team's history has already been written. In the likely event that they lose in the playoffs, they will forever be branded as the team that clinched early and then burnt out. It's really too bad that barring a World Series win, this is how this amazing season will be remembered.

So to sum up, here's my suggestion: if these games upset you, don't watch them. Don't even check the scores in the morning. There's simply no point in getting yourself worked up over games that are utterly meaningless. Do something else with your time until the playoffs start and forget the last twelve games of the season ever happened. If nothing else, it should allow you to enjoy the playoffs without being haunted by the anxiety that these games may have caused you. 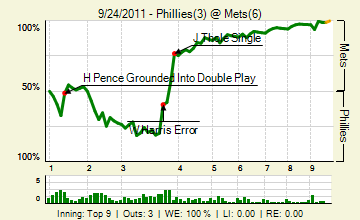