The Phillies eight game losing streak came to a halt, as the Phillies new-look lineup cranked out 19 hits, and Roy Halladay pitched six scoreless innings en route to his 19th victory in the Phillies 9-4 win over the New York Mets today at Citi Field. 99 wins people!

The Phillies scored early and often, starting things in the first with a two run homer from Hunter Pence and a sacrifice fly from Raul Ibanez. The Mets fell behind 9-0 after four innings.

With the game well in hand, Charlie Manuel pulled Roy Halladay from the game after six innings, and then watched as the bullpen made the game a little more interesting than it should have been.  The Mets scored three times in the seventh off the still-struggling Antonio Bastardo, who is either still tipping his pitches or is hurt or just completely lost the ability to put hitters away.  Bastardo retired Justin Turner for the first out of the inning, then promptly walked Mike Baxter and surrendered a home run to Ronnie Paulino on a gross hanging slider.  Jason Pridie would triple and score on a Val Pascucci single.  After Bastardo walked Jose Reyes, Vance Worley was summoned into the game, and retired the next two batters. Worley would surrender another run in the eighth after allowing a leadoff single to Nick Evans and an RBI double to Justin Turner. Worley would settle in and retire the side without allowing another run. Ryan Madson pitched a scoreless ninth despite allowing leadoff singles to Jose Reyes and Ruben Tejada.

So I hope Messrs. Halladay, Lee, Hamels, and Oswalt are ready to go deep into some playoff games. This bullpen is looking messy right now.

Lots of love for Carlos Ruiz, who collected four hits today, and Pence and Jimmy Rollins, who had three a piece. Ryan Howard struck two hits before being removed from the game once the Phillies got a huge lead.  Chase Utley had an RBI single in the second for his only hit on the day.

Fangraph of the Great Unclench 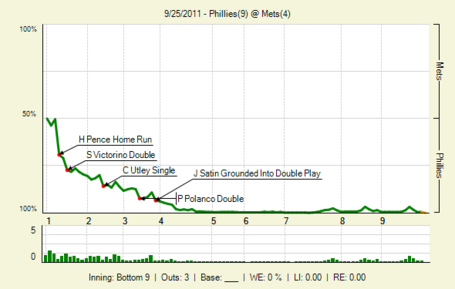