End of the Century: Phillies 4, Braves 2

Share All sharing options for: End of the Century: Phillies 4, Braves 2

Cliff Lee settled in after a slightly bumpy start and went six strong innings, as the Phillies slowly piled on to defeat the Braves 4-2 for their 100th victory of the 2011 season.

Chipper Jones helped the Braves jump out to an early lead with a solo home run in the first inning, and would score again on an Alex Gonzalez RBI double in the second.  Lee would cruise through the rest of the game, surrendering five hits -- all for extra bases -- striking out six and walking none in his six inning postseason tuneup.  Braves starter Randall Delgado was extremely sharp in the early going, allowing just a Ryan Howard infield single through the first three innings.  In the fourth, Placido Polanco picked up an RBI single, and Jimmy Rollins tied the game with a solo home run in the fifth.  The Phillies would score their final two runs on Raul Ibanez RBI singles in the sixth and eighth innings.

The Braves, for their part, cling to a tenuous lead in the Wild Card, pending the outcome of tonight's Houston/St. Louis contest. 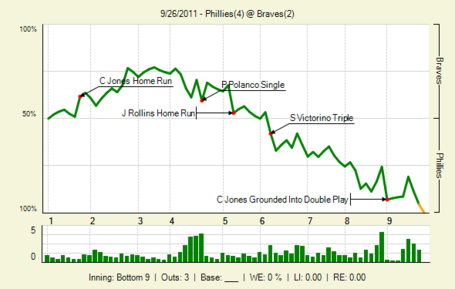