So it was that in the last game of the season, facing an opponent living and dying with every pitch, behind a late-game lineup featuring Brian Schneider, Wilson Valdez and Michael Martinez and a sequence of extra-inning relievers that won't see meaningful playoff innings, that the 2011 Phillies made their lasting mark as the best team over 162 games in the long history of the franchise. In the bargain, they went Full Sherman on the hated Braves, tossing the last shovelful of dirt on an Atlanta collapse that ranks with the '64 Phillies, '95 Angels and '07 Mets as the worst in baseball annals. You were expecting something different?

The game had a schizophrenic aspect from the first pitch, as the Braves sent ace Tim Hudson to the mound against forgotten former fifth starter Joe Blanton. Rolling out their almost-regular lineup at the start (Shane Victorino having gotten the night off with minor back inflammation), the Phils took a 1-0 lead as Ryan Howard doubled in Hunter Pence in the first. Atlanta knotted the score on a Michael Bourn speed run--single, steal, groundout advance, sac fly--and two innings later took a 3-1 lead as Dan Uggla hammered an 0-2 mistake from Cole Hamels, getting some work in a relief stint, into the seats.

Then it started getting weird. Still down 3-1--thanks to a brilliant Pence throw to nail Uggla at the plate on a Jack Wilson single that ended the sixth--the Phils threatened with runners at the corners and one out in the seventh when Carlos Ruiz hit what looked like a dead double-play ball right at shortstop Wilson. But the veteran booted it as Raul Ibanez came home with the second Phillies run. Victorino came on to pinch-hit against reliever Eric O'Flaherty, absolutely crushed one offering foul... and grounded into an inning-ending double play started turned by Wilson.

Meanwhile, the Phils' veteran relievers continued to hold Atlanta off the board. After three innings from Hamels, Vance Worley worked out of trouble, followed by a clean seventh from Brad Lidge and a dominant eighth from Ryan Madson. In the top of the eighth, the Phils had loaded the bases against clearly gassed Braves lefty Jonny Venters, but couldn't break through. They got their last shot in the ninth facing Atlanta closer Craig Kimbrel, finishing up a likely Rookie of the Year campaign. Placido Polanco led off with a single, and gave way to pinch-runner Pete Orr. Kimbrel struck out Carlos Ruiz on a full count, but loaded the bases by walking Ben Francisco and Jimmy Rollins. Chase Utley followed with a sac fly to left that tied the score. Hunter Pence followed with another walk, and Braves skipper Fredi Gonzalez reluctantly came out to lift Kimbrel... in favor of Kris Medlen, who had pitched one lone inning all season after a long injury rehab. But the move paid off as he induced a foul-out from Michael Martinez.

Michael Stutes came on to pitch the ninth, and turned in his most dominant outing in months. But now the reality of the two teams' circumstances seemed to conspire against the Phillies: Howard was out of the game, as was Victorino, and Ruiz soon followed. With Antonio Bastardo evidently unavailable, the Phils' hopes of setting a franchise single season win record, and the Braves' of playing into a 163rd game to keep up with the Cardinals after their 8-0 win over the Astros, came down to a handful of relievers who would be going home after the game, win or lose. Michael Schwimer came out for the 10th, stranding Bourn after Martinez made a great running catch of a deep drive from Chipper Jones. He set them down 1-2-3 in the 11th, and Justin De Fratus survived a leadoff Jason Heyward single in the 12th, stranding him at third.

The 13th was the fateful inning for the Phils. After Domonic Brown (yes, him) struck out to lead off the frame, Schneider worked a walk, and two batters later moved to third on a Chase Utley single. Pence followed, blooping a single just over Freddie Freeman at first to score Schneider and give the Phils a 4-3 lead. David Herndon, probably battling Blanton for the last spot on the staff, came on looking for his first career save. He struck out Jones on a nasty breaking pitch, walked Uggla after a couple very close pitches, fell behind Freeman 3-1... and induced a game-ending 3-6-3 double play, cementing the Braves' collapse, giving the Phils their 102nd win of the season, and securing Charlie Manuel's franchise-record 646th win.

Now the focus will turn to a tough first-round matchup with the Cardinals, who won six of nine regular season meetings, boast three good-to-excellent starting pitchers, and feature an inner-circle Hall of Famer in his prime in Albert Pujols. This is the part that's the most fun, and the most agonizing... but not, in terms of the team's caliber, the most meaningful. Over the 162 games now completed, this edition of the Phillies is the best one they've ever put on the field. It's been a joy to watch them... which isn't to say they, or we, are satisfied. 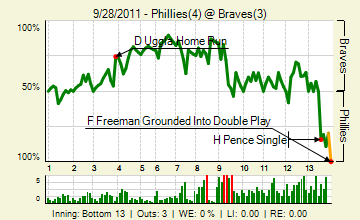