Share All sharing options for: All Wet: Phillies 4, Marlins 8

For some reason, the one hour and thirty eight minute rain delay didn't clue me into the fact that tonight's game was going to be one of those games. The new feature Ask The Booth should have clued me in a bit more.

It was just an odd night all around. It looked like the Phillies were going to take control early, scoring three runs on four hits in the second inning. Wilson Valdez, who was hitting .379 with runners in scoring position coming into the game, hit a two-run triple. Cole Hamels followed that up with an infield single that brought in another run, making it 3-0. Hamels gave up a two-run home run to Mike Cameron in the bottom of the second, and then a monster second decker to Mike Stanton (who else?) in the third. Hamels again helped his own cause with an RBI single in the fourth. He was responsible for half of his own run support, and managed to turn a shaky start into a solid one.

When Antonio Bastardo came on in the bottom of the eighth, a feeling of trepidation came over me. Tonight's appearance was his third in three days. Bastardo walked both Omar Infante and Logan Morrison before being yanked for David Herndon. (LoMo came into the game for Mike Stanton, who tweaked his hamstring while running to first base.) It was at this point that things began to get a bit surreal. Gaby Sanchez, who has hit just .209 since the All-Star Break, came up and hit a three run home run, giving the Marlins a lead with a score of 6-4. Then Mike Cameron steps in and jacks another homer, his second of the night. After Bryan Peterson grounded out, Greg Dobbs came in to pinch hit. Dobber has done some damage against the Phillies this year, and continued to make me hate him by hitting the third home run of the inning, and the fifth of the night. Despite showing some signs of life in the ninth, the Phillies couldn't mount a comeback.

It should be noted that before tonight's three homer meltdown, Herndon hadn't allowed a run in 11 straight appearances. Something else that should be noted? As I mentioned above, tonight was the world premiere of Ask The Booth, a new interactive activity/Pandora's Box for the Phillies broadcast booth. By tweeting a question to the Phillies account with the hashtag #askthebooth, you can have your question "answered" on air! I really don't think the media guys over at the Phillies have any idea what they're getting themselves into. May God himself have mercy on their souls.

Behold, the Fangraph of zzzzzzzzzzzz... 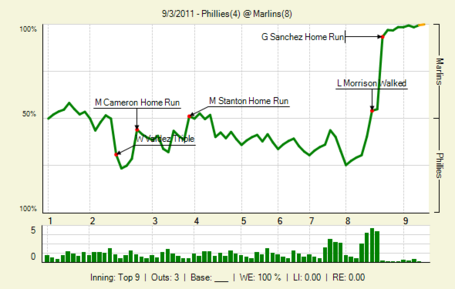