In the spirit of Labor Day -- which became a national holiday in 1894 on the heels of the Pullman Strike -- Charlie Manuel and the Phillies decided to play today's game under protest.

Not surprisingly, it was Joe West (the first member of his family in over 125 years not to be employed by the Pinkertons) who was at the center of another controversy on the baseball field. With the score tied at 2 in the top of the sixth and Ryan Howard on first with no outs, Hunter Pence hit a ball to deep right field. Brian Peterson went back on the ball and attempted to make a leaping catch at the wall, but a fan appeared to reach over the wall and make contact with the ball. Pence ended up stopping at second for a double.

What happened next is confusing: Joe West called his team together to review whether the ball cleared the wall, which he said after the game was requested by Charlie Manuel. But Charlie Manuel said after the game that he requested nothing. As it turns out, according to Matt Gelb, an umpire IS allowed to review a play without a request from a manager. So, naturally, after reviewing a play just because he felt like it, Joe West ruled that the fan had interfered. Pence was called out. Howard went back to first. Charlie argued and was ejected. And the rest of the game was played under protest.

The play will be referred to MLB's Executive VP for Baseball Operations, Joe Torre, but Bud Selig will inevitably find a way to botch the decision. If the protest is upheld, then the game will be replayed from the point the call was made. It's extremely unlikely that the protest will be upheld, though, and frankly it doesn't matter. The Phillies have a 7.5 game lead in the division and a 6.5 game lead for home field advantage. Chances are that this game will be completely meaningless, and flying all the way back to Florida to play out three innings with the Phillies' September schedule already offering zero flexibility would be far more trouble than it is worth.

Still, if what Joe West did was within the rules, why did he feel the need to lie after the game and say that Charlie requested the replay? Could it be that he doesn't know the rules and was attempting to cover his ass? Joe might have disappointed daddy when he decided not to join the Pinkertons, but the authoritarian, unaccountable, and duplicitous organization he ended up working for ain't too shabby in its own right.

Anyways, the Phillies managed to load the bases with one out that inning but by rule Wilson Valdez had to bat.

Roy Halladay was only so-so today. He appeared to be struggling with the strikezone and the Marlins took an aggressive approach. It seemed as if everything they made contact with went for a hit. His line: 6 IP, 9 H, 3 R, 2 ER, 1 BB, 4 K.

Halladay was nevertheless in line for the win after the top of the seventh as the Bear Jew was called on to hold down a 1 run lead. He wasn't able to do it. A leadoff walk to Omar Infante, a double to Greg Dobbs, and an RBI groundout by Gaby Sanchez tied the score at 4.

And it stayed tied at 4 for the next seven innings. Brad Lidge and Michael Stutes combined for three innings of scoreless relief and David Herndon Houdini'd his way through three innings from the 11th to the 13th. Each of those innings he put runners in scoring position with less than two outs and each time he was able to escape without allowing a run. However, with only Ryan Madson available in the pen and The Book dictating that on the road you wait to use your closer until you have a lead, a clearly gassed Herndon was asked to go out for one more inning. He loaded the bases with two outs for Mike Cameron, who drew the always anti-climactic walk off walk to end it. Herndon walked 7 batters -- 5 intentionally -- in his 3.2 innings of work. DIPS go boom. 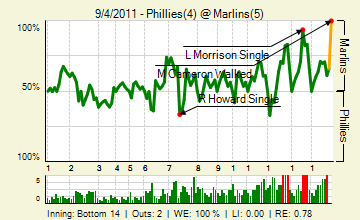