As the season winds down, I appreciate these types of games more and more. Games in which everyone is doing well, and everyone is enjoying themselves. There was very little, if anything at all to complain about during tonight's thoroughly enjoyable 9-0 thrashing of the Braves. After yesterday's lengthy and frustrating outing, the Phillies were clicking on all cylinders. And best of all, nothing bizarre happened.

The Phillies got things started aginst Derek Lowe early, plating two in the first off singles from Placido Polanco and Chase Utley, a walk from Ryan Howard, and a single from Hunter Pence. They struck again with two in the fourth thanks to a timely single from Shane Victorino. A huge fifth inning saw them putting up three runs, and they'd tack on one more each in the seventh and eighth. Lowe would last five innings and give up five earned runs and two unearned for seven total.

Pretty much everyone had something to contribute tonight. Both Utley and Pence broke out of slumps with two hits each, and several more hard hit balls. Polanco had two hits as well. Shane and Chooch were good for one hit each, and Mayberry had two walks. Howard went 2-for-3 with two walks (one intentional) and one home run, his 31st. The Phillies fielding was also on display. Howard was the owner of a pretty fantastic on-the-back basket play in foul ground. Victorino had a great catch on a dead run in center field. And Martinez, who was 0-for-3, had a couple of fine plays at short.

And then of course, there's Cliff Lee. Cliff Lee, the bringer of light and rainbows, who rides on a unicorn to Citizens Bank Park. It took him just 100 pitches to handcuff the Braves. He'd surrender just five hits for his sixth complete game shut out of the year, and the eleventh of his career. Including this game, he has a 29 2/3 inning scoreless streak. He's reached 204 strikeouts on the year. He even hit a single. Cliff Lee is pitching his way into the Cy Young race. He will not be ignored. 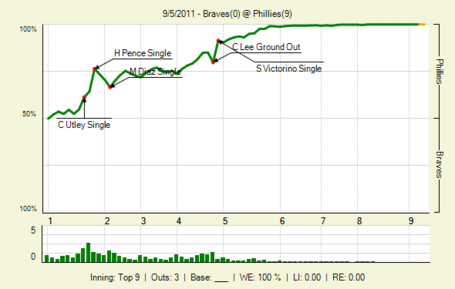