Share All sharing options for: Phillies Offense and Consistency

During the last off-season, I wrote this piece with the objective to test the idea that the 2010 Phillies' offense was inconsistent.

I did the same for games through Sunday, comparing each team's top and bottom half (about 70 games each), and top and bottom quarter (about 35 each).

(results after the jump)

By both measures, the Phils are slightly more consistent than average.  A third measure, Standard Deviation normalized for Runs per Game, agrees with these, with the Phillies ranking as 7th most inconsistent, but still more consistent (i.e. lower standard deviation) than the National League average.

NL Rankings for Runs per Game and Scoring consistency through Sep. 4
(other than for RPG, #1 rank is most INconsistent, #16 is most consistent) 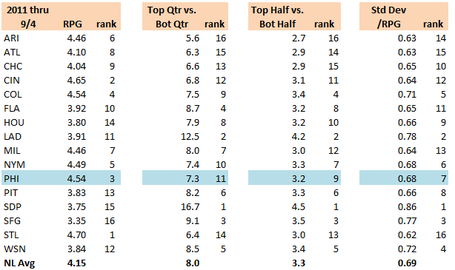 Some of the variation in the year-to-date numbers above is due to the substantial increase in scoring after Chase Utley joined the team, as outlined here.  In addition, I consider the team with Utley in the lineup different enough to warrant its own analysis, and since May 23rd, the Phillies' offense ranks as one of the more consistent in the NL:

NL Rankings for Runs per Game and Scoring consistency since May 23
(other than for RPG, #1 rank is most INconsistent, #16 is most consistent) 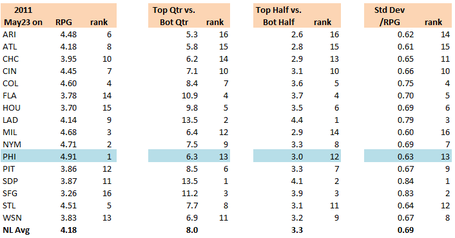 One other indicator: after being shut out 4 times in the 46 games through May 22nd, they've been held scoreless only once in the 90 games since then, fewest in the NL.

I should note that there is a lot going on in these numbers.  For example, Wet Luzinski pointed out off-line how "inconsistent" the NL West is.  For example, 4 of the 5 most inconsistent in terms of StdDev/RPG (for the year-to-date stats) are NL West teams: SDP #1, LAD #2, SFG #3, COL #5.

I assume this is in large part due to the their extreme home-road splits.  Colorado for example, has scored 5.68 per game at home (3rd highest home rate in MLB behind only Texas and NYY), and 3.49 on the road (last in MLB).  Meanwhile SDP, SFG, and LAD have all scored significantly better on the road than at home.