Vanimal in the Mist: Phillies 6, Braves 3

Share All sharing options for: Vanimal in the Mist: Phillies 6, Braves 3

As the Braves and Phillies got underway Tuesday night following a rain delay of about two hours, television spectators saw something far out of the ordinary at Citizens Bank Park: empty seats. The combination of miserable conditions and a September game between playoff-bound teams about as devoid of consequence as possible limited the Bank to something less than half capacity; the organization itself acknowledged as much by announcing during the game that tickets for tonight's contest could be exchanged for a seat at selected games in 2012--whether or not you used them tonight. But with negative off-days on the schedule, the teams were determined to get this one in, and despite the rain never really letting up, they wound up playing nine.

Fortunately, Vance Worley evidently is as much at home in the cold and rain of a September evening in Philadelphia as on a sweltering afternoon in Chicago, or most anywhere else. Facing potential early trouble with two on and one out in the first, Worley struck out Dan Uggla swinging and Chipper Jones looking, the first two of his six Ks on the night. With two outs in the bottom of the inning, Chase Utley put the Phils up 1-0 with his tenth home run of the season, and just his second since the start of August; the team tacked on a second run when Raul Ibanez notched the first of his three hits on the night to score Ryan Howard.

Uggla cut the lead to 2-1 with a solo homer off Worley in the fourth, and the Braves tied it on an Alex Gonzalez sacrifice fly in the top of the sixth after Worley loaded the bases with none out. But the rookie right-hander escaped without further damage, and found himself in line for the win when the Phils added a pair of runs off Tim Hudson, the second coming on an Ibanez double. The Braves pulled within a run again off Michael Stutes in the seventh, thanks mostly to the speed of Michael Bourn; the former Phillie doubled to lead off, stole third with one out and scored on an Uggla fielder's choice. But Stutes induced a flyout from Jones to escape further trouble, and the Phils plated two more in the bottom of the inning to create some comfort. Brad Lidge and Ryan Madson closed things out.

The win was the Phillies' 90th of the season, marking the first time in club history they've won at least 90 in four straight seasons. Good times. Good Fangraph: 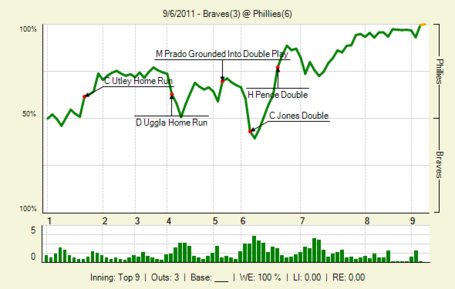