Swept Out to Sea: Phillies 3, Braves 2

Share All sharing options for: Swept Out to Sea: Phillies 3, Braves 2

The Phillies ran right into the teeth of the Atlanta Braves' biggest strength -- the back end of their vaunted bullpen -- and improbably emerged victorious.  Just one more reason to love this team.

Starting pitchers Roy Oswalt and Brandon Beachy battled to a near stalemate through the first few innings, with the teams' only hit through the first four innings being a Raul Ibanez solo home run in the second inning. Oswalt, on the other hand, held the Braves hitless through the first five innings, allowing a leadoff double to Michael Bourn to lead off the sixth.  And being Michael Bourn, he scored to tie the game at one run a piece.  Oswalt's stuff was quite good tonight, as he struck out seven and induced plenty of swinging strikes, but walked four through seven innings.

The Braves would jump ahead 2-1 on an RBI single from Freddie Freeman in the seventh, and the Phillies faced the prospect of running the Eric O'Flaherty / Jonny Venters / Craig Kimbrel gauntlet.

Things looked bad in the seventh, as the Phillies managed to load the bases with two outs after O'Flaherty struck Chase Utley in the helmet with a pitch, but then promptly struck Ryan Howard out.  Utley was removed from the game with dizziness, and will likely be held out for a couple games.  At this point, why not?

But no one's invincible, as the Phillies scraped together a run in the eighth off Venters after a leadoff single from pescophile John Mayberry, a sacrifice bunt (in a rare good strategic situation) from Wilson Valdez, and an RBI single from Placido Polanco.

After Ryan Madson held the Braves scoreless in the top of the ninth, the Phillies faced Peter Moylan in the bottom of the ninth.  Because why would you want your nigh unhittable relief pitcher in when the game is on the line?  Let's go with the Australian!

Raul Ibanez stroked worked a one out single walk, and would advance to second on a Carlos Ruiz base hit. Much maligned Ross Gload came in to pinch hit for Ryan Madson, and lined a single down the right field line, scoring Ibanez from second and ending the game, and the three game sweep.

The Phillies now lead the NL East by 12 games in the loss column. 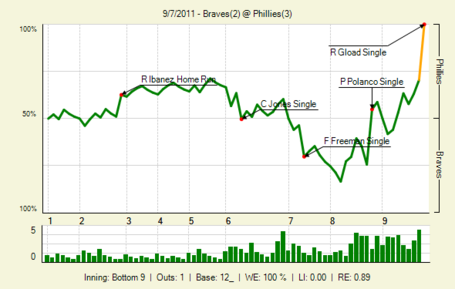