At the high end, something in the 106-108 range is within the realm of possibility: 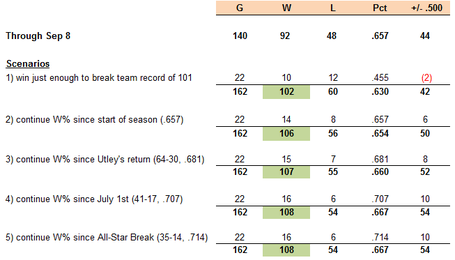 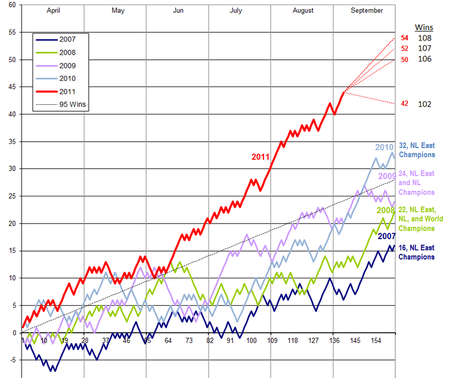 Charlie Manuel: The Phils' 92nd win on Thursday tied Manuel with the 19th century's Harry Wright for 2nd most wins by a manager in franchise history, at 636.  If and when they win their 102nd, Manuel will tie Gene Mauch as the winningest Phillies manager with 646.

Raul Ibanez: his home run on Wednesday was the 250th of his career.  At the moment he is at exactly 7,000 plate appearances.

A 63-year Winning Record? The success of the recent years means that the Phillies have now been an above .500 team dating back to 1961.  If they win 105 games, it will not only shatter the team's single season record, but it will also extend the time over which they are over .500 all the way back to 1949, a 63-year period.  They have to go 13-9 the rest of the way to accomplish that.

Pence arrived with a bit of a reputation as a free swinger, but he seems to have changed his approach since coming to Philadelphia.  It's only been a little over a month, but the results are encouraging nonetheless:

After a slow start due to an unusually high number of rainouts, MLB attendance has caught up to and slightly surpassed 2010's average per game.  This is in spite of the black hole in LA, where attendance is down by more than 8,000 per game from last year.

Two articles of interest from The Biz of Baseball:
- The Race to 3 Million Fans in Major League Baseball
- Red Sox See 700th Consecutive Sellout at Fenway Park
If Mother Nature sees fit for the Phillies to play all 81 home games, and they continue selling out through the end of the regular season, they will finish 2011 with 204 straight sellouts, one more than Colorado had in 1995-97.

GAME SCORES AND THE CY

phlsandthrills has a nice writeup on the Cy Young race.  Here is another view, using Game Scores: 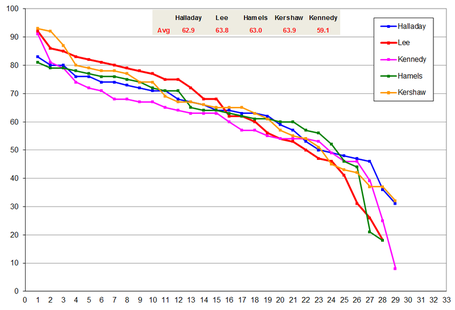 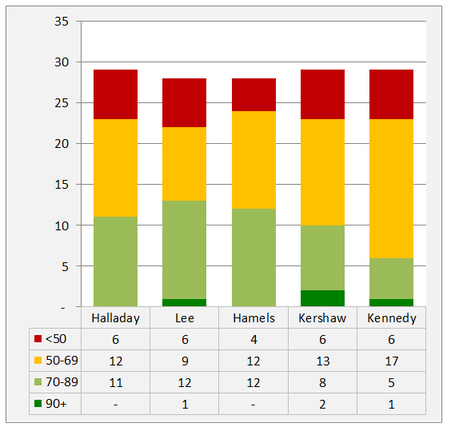