When the Phillies posted the lineup for last night's game -- a lineup that did not include Chase Utley, who is in Philadelphia and was just diagnosed with a mild concussion, or Ryan Howard, getting a night off against a left-handed starter -- a collective groan like that of a Komodo Dragon arose from the fanbase.  "Well, they're conceding this one."

But deep down, didn't you kind of know that this makeshift lineup would explode for a bunch of runs?  Well, they did, particularly in a six run sixth inning, as the Phillies defeated the Brewers 7-2 behind a strange start by Cole Hamels.

Hamels has had velocity issues since his return from the disabled list, sitting around 90-91 instead of the 93-94 from before the injury.  He's continued to pitch well, because he a good pitcher (ta daaa!), but he has not been nearly as sharp.  It showed last night, too, as Hamels pitched a complete game but only struck out two Brewers batters, allowing two runs -- both on solo home runs from Yuniesky Betancourt in the fifth and Corey Hart in the sixth.

The Phillies, for their part, didn't even get a hit in the game until a leadoff single from Merman John Mayberry in the fifth.  Later, as you know, the Phillies exploded for four doubles in the six run sixth, including a ball off the yellow line in the left field corner from Shane Victorino that was reviewed by the umpiring crew at Charlie Manuel's request.

The Phillies claimed their 92nd victory of the season (the same number as the 2008 World Series winning squad), and handed the Brewers just their 20th home defeat (in 70 games). 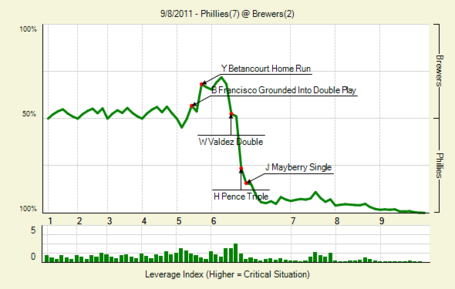