Admit it: you keep waiting for reality to offer up something to substantiate your fears that this Phillies team, obviously great though it is, might stumble when the stakes are highest. You're worried, as you should be--you're a sports fan--that some talented foe might take advantage of relatively favorable matchups and a few lucky bounces and knock off the mighty Fightin's come October. And they might: short series, anything can happen, and all that jazz. But nothing over the last five days--when the Phils have played their two closest pursuers, record-wise, and won all five contests--has offered fuel for your fears.

Tonight's contest against the Brewers seemed as likely to end in defeat as any Roy Halladay start could. Miller Park is a tough venue for any visitor, and the Doc entered the game with a 1-2 record and 6.41 ERA against the Crew, including an ugly loss in Philadelphia back in April. Milwaukee starter Shaun Marcum, by comparison, came into the game 2-0 with a 2.33 ERA in four career starts against the Phils, including a win earlier this season. An offspeed maven with superior command, Marcum nicely fits the profile of pitchers that frustrate the fastball-fixated Phils.

But whether from a hospitable impulse or a mental lapse, he came out tonight throwing fastballs, and they made him pay. With men at the corners and one out in the first inning, Ryan Howard got ahead 2-0 and deposited one high-80s heater into the second deck to put the Phils ahead 3-0. Marcum settled in after that, holding the Phillies off the board until they chased him with two more runs in the seventh to go up 5-0, but Howard's early blow--his third career homer off Marcum--gave the Phils a lead they would hold all the way through.

Halladay made sure of that, limiting the potent Brewers lineup to four hits and a run over his eight innings of work. Featuring a sharp curve early and his signature cutter all night long, Doc escaped one bases-loaded, one-out threat in the fourth by inducing a first-pitch double play grounder from Yuniesky Betancourt, then set the Brewers down in order the next two innings before yielding a run in the seventh on a Casey McGehee double, a groundout and a Betancourt sac fly. Halladay wound up striking out nine on the night, giving him 204 for the season.

For those really determined to find something to worry about, thank Antonio Bastardo. Called on to finish off the 5-1 lead in the ninth, Bastardo allowed an 0-2 leadoff single to Prince Fielder, then walked McGehee. On came Ryan Madson, who got pinch-hitter Jerry Hairston Jr. to ground out on a super-close play at first.  Betancourt followed with a single to score Fielder, and McGehee came out on a Jonathan Lucroy sac fly. But pinch-hitter George Kottaras grounded out on the first pitch he saw, and the Phils had their 93rd win of the season. On September 9, please note. 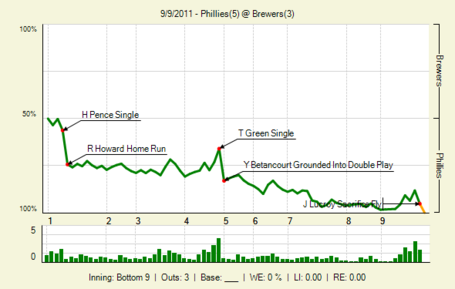