Random thoughts from a contentious offseason (I can only imagine what it's been like in Boston). Some of these have been touched on in separate posts, or warrant that separate posts address them, but in any case here they are...

The Phillies and Postseason Success

Lofty expectations and the disappointment of the 2011 NLDS have caused a portion of the fanbase (maybe even the majority) to view the current team as failures in the postseason.

Some of that is simply a recency effect -- if they had reached the World Series in 2011 instead of 2009, for example, I think the reaction would have been very different.

But it's worth reviewing how the Phillies' current playoff run over the past five years compares to other teams' last five playoff appearances...


Takeaways from this list:
- The Phillies are the only team to reach the playoffs in each of the past 5 years
- They aren't the best, or the worst, at capitalizing on their playoff chances
- They've actually been more fortunate than 5 of the 8 other teams

Based on fWAR, he was only 32nd in July-September. But when normalized to 700 plate appearances, his 8.2 fWAR/700 PAs was 7th in the NL. That's a little unfair (to others) since his exposure to righties was limited, and it's a smaller sample, but here are the top 10 in the NL for the last three months of 2011:

These haven't been easy to find, but by piecing together 2008-2010 from here (which has all minor league splits through 2010), and his 2011 splits from here (which aren't going to be there much longer), we get this picture: 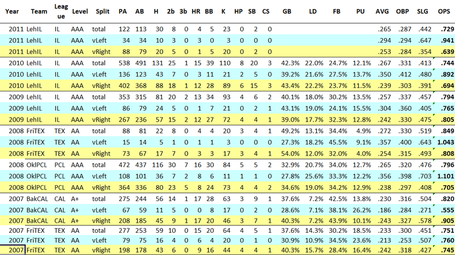 However in 2011 he only faced RHPs 59% of the time. So while he outperformed his minor league stats, his overall totals (.854 OPS) looked even more impressive because he didn't have to face as many righties.

With a typical 75/25 split, these work out to an .827 OPS, and I think we can all agree if we get anything close to that from Mayberry in 2012 we will be very happy with his production.

At the age of 23 last year, he already hit as well as the average MLB left fielder:

These were the full-time left fielders around Brown in wOBA:

So offensively he did just fine for a 23-year old rookie. His issues are on defense, and even there he has the athleticism to become a passable left fielder, in the great and rich Phillies tradition of Luzinski, Burrell, and Ibanez.

Looking ahead to 2012 -- realizing that the stated plan for Brown (while he'll get a chance to compete for the LF job in ST) is to let him get substantial playing time at AAA -- these are the 2012 MLB projections from three systems:

Cole Hamels is comparing very well to Steve Carlton at the same age.

Hamels vs. Carlton through age 27:

In addition, Hamels has been one of the best pitchers in the NL for the last two years:
- 3rd lowest ERA
- 3rd lowest WHIP
- 2nd best K/BB ratio

There have been a number of articles and commentors expressing disappointment at his time in a Phillies uniform, including a particulary stupid one at Bleacher Report that I am not even going to provide the link for.

But I don't know that we should be disappointed with what we got out of him. His FIP/xFIP don't tell as rosy as story, but when we look at the actual results, the only issue is that he missed some starts. For the time that he was actually on the field, he delivered his usual front-line starter numbers:

How many pitchers in all of baseball had a better record than Oswalt since the trade? Not many.

After making the last out in each of the last two postseason defeats, Ryan Howard is facing detractors across the spectrum: from the casual fan who expects him to hit a HR or get a key hit every time up, to the SABR-savvy fan who knows that Howard is not one of the best hitters at his position, let alone in the game.

One aspect of the latter is to discount his RBI totals because the Phillies have tended to have a lot of runners on base ahead of him throughout his career. That is in fact true, so setting aside for the moment the fact that RBIs is a crappy stat, if we want to know how effective he is at getting runners home, the stat to look at is the percentage of runners driven in.

These are the three highest in MLB since 2008:

Other first basemen over that period:

That is good, but not great, for a first baseman (10th out of 28 with 1000+ PAs since 2008), but his apparent decline is exacerbated by the overall decline in hitting, and time lost due to injuries. He was leading the league in RBIs and climbing in HRs last year, when he started sitting out games for his various foot/ankle issues.

Health-issues (and therefore playing time) aside, I don't see a huge decline yet.

Hunter Pence arrived in Philadelphia with a well-earned reputation as a hacker. However he seemed to change his approach after the trade:

He only had 236 PAs post-trade. It will be interesting to see what he does in 2012, especially in the early going, when with Howard out he will be viewed as the main run producer.