Who Would Buy That For The Holidays? Family Fun Edition

The family that looks like idiots together...gets ridiculed together.

Share All sharing options for: Who Would Buy That For The Holidays? Family Fun Edition

It almost feels like cheating starting my return to Who Would Buy That with two non-Phillies specific items in a row. But sometimes things are so offensive that I can't let them go.

This item jumped out at me when I first saw it in the men's section of FansEdge. Right then and there I knew it would be making my list. But then I saw it again in the women's section. And in the kids and infants. And I didn't know how I'd gotten so lucky. Products for the whole family! A whole family of brain damaged people!

For the family that wants to look like demented train conductors is this line of striped pants, skirts, and overalls. For the Phillies, they recommend red and white or blue and red. They're also listed in the tailgate section of the website, which is really baffling to me. Yes, please, someone out there -- wear these to a tailgate and see how long it takes for your friends to start dragging you around Lot K with six Phillies hats on your head asking people if they want to take pictures of the Phillies new clown mascot. 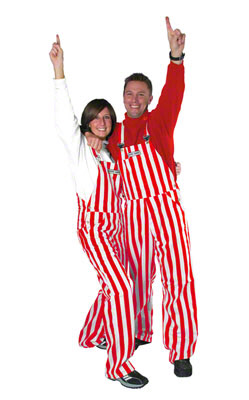 The stripes are reminiscent of both train conductors and clowns, at long last uniting those two extremely popular 1920s depression era mainstays. All you need now is a stick with a Phillies scarf tied onto the end of it and you've got the train conductor-clown-hobo trifecta! Or perhaps you need Christmas themed costume? Because these pants look like the bottom part of a candy cane outfit. One that you'd wear to the boss's holiday party thinking it was a "fun" party and when you get there everyone is wearing normal clothes and drinking sparkling cider. And when was the last time overalls were a thing? I know Rachel wears them on Friends circa 1994. Tai wore them in Clueless in 1995. I had a pair I wore in middle school, which was in 1996. But have you seen anyone outside of a Counting Crows cover band wearing them since? Overalls are too ridiculous and ugly to even be thought of as 90s retro wear. People have been trying to remove them from history for years! I wouldn't be surprised if I put on Clueless right now and found Tai wearing something entirely different. You know what? Let's all put Clueless on right now. It's a great movie, I promise you'll like it. And at least the overalls in that movie aren't striped like a candy cane. 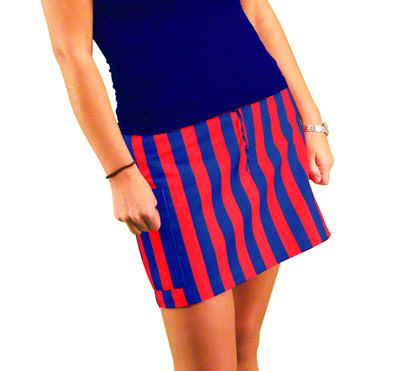 I find it baffling that they felt the need to produce a line of striped "clothing" for the entire family. The design of the skirt, pictured above, isn't bad, but I don't know a soul who would wear it. The retina searing color scheme aside, I don't find it practical at all. When I'm at a tailgate or sporting event, the last thing I want to be wearing is a skirt. With the jumping, the cheering, and the drinking, I can just imagine it ending so, so badly if I'm wearing a skirt. 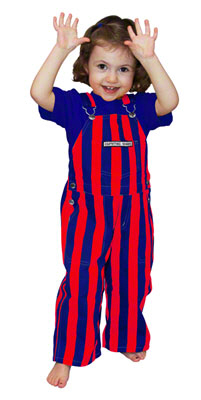 And I know that kids are theoretically cute in anything, but why put them through the indignity of wearing striped overalls? Especially if they match mom and dad's overalls? Granted, when they're toddlers and infants you can put them in anything you want and they can't protest. But unless it's Halloween, everyone is going to cross to the other side of the street when they see your clan of weird trucking down the sidewalk. And when your kids start understanding reality and having opinions and such, you had better burn all the photographic evidence lest your spawn start hating you for embarrassing them when they were too old to tell you how fucking stupid you look.

So, who would buy that for the holidays? That weird family down the street. They're not your next door neighbors (thank God), but they live close by so you see them all the time. All. The. Time. You cannot figure out what their deal is. Are they hippie parents? Are they super strict? Are they overprotective? Are they weirdly close? Are they aliens? Last Halloween, they all spent weeks working on a really detailed, involved haunted house for the neighborhood kids. But instead of ghosts and witches and fake eyeballs and brains, the dad was dressed up as Jesus and gave the Sermon on the Mount while wearing a Native American headdress, their son held up a Chase Utley fathead and distributed condoms and safe sex tips, their daughter reenacted the nursery rhyme Little Miss Muffet while holding up signs about the dangers of cheese, and the mom was trying to give out bowls of haggis at the door. "It's intestines! For Halloween!" The seance they had in their backyard on Valentine's Day would have been more appropriate. Though you couldn't tell if they were trying to contact their dead relatives or holding hands while watching a Phillies game, since they were all decked out in oddly authentic Phillies uniforms. You and the rest of the neighborhood has been trying to convince them that no one will be sending out family photos in their Christmas cards this year, so they shouldn't either. You submitted the pictures from the last three years to Awkward Family Photos and they instantly became the most popular on the site. But the yearly therapy needed to erase those images from your mind is getting too expensive. Though if you give them all those striped outfits, they'll at least be wearing appropriate clothing in this year's picture.