Recap of 2012 Phillies hitting stats by position, compared to 2011.

Share All sharing options for: 2012 Phillies Hitting by Position

When reviewing the Phillies' offense in 2012, two things jump out: 1) the offense this year was very similar overall to what it was last year, and 2) in both years it ranked squarely in the middle of the pack in the National League. (Digging a little deeper we would see that the 2011 Phils had the highest scoring offense in the league for the last 2/3 of the season, after ranking near the bottom in the first third, but let's stick to annual totals for now). 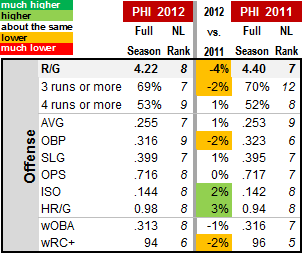 While the offense overall was similar, there were many changes by position, some of which were to be expected, and others not.

OPS and Runs Created by Position 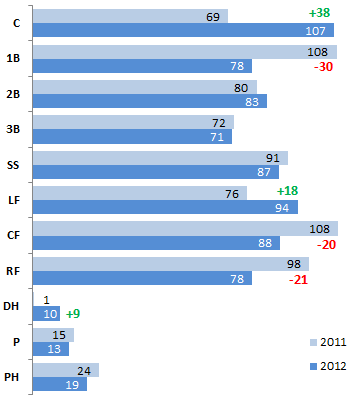 1B: With Ryan Howard recovering from a torn Achilles, it was expected that production from first base would fall off this year, and in fact it did, both because Howard's replacements did not match his typical production, but also because after returning, neither did Howard.

CF, RF: Since both Shane Victorino and Hunter Pence enjoyed career-best seasons last year, it was reasonable to expect some regression. Before the two were traded, that was certainly true in Center Field, but Right Field production was actually ahead of 2011's full year pace. After the trade, CF production improved, but still fell short of Victorino's excellent 2011. However RF production fell off after the trade, and finished far below 2011 levels.

C: The substantial increase in production from Phillies catchers (primarily Carlos Ruiz) was not expected. The catchers' OPS improved from below average in 2011 to the best in the NL this year.

LF: Largely on the strength of Juan Pierre's resurgent season, Left Field was the second most improved position on the team.

2B: Chase Utley's power was closer to what it was in his peak years, and 2nd base production improved, even though Utley played a full month less in 2012 than he did last year.

The second half began with a sense of hope. Utley and Howard had just returned, and while they had both OPS'ed in the .600s in their first few games, that was at least partly attributed to the fact that they had not had a spring training to get ready. However, in the end, as has been discussed previously, the Phillies' second-half surge was almost entirely due to improved pitching. The offense was essentially the same overall in the second half as it was in the first:

For all of his success with runners in scoring position (important as that was), Howard's underlying stats wound up being essentially the same as the fill-ins, and so second half production out of that position was nearly the same as in the first half.

But that's not to say that there weren't changes -- three positions had much different numbers in the second half:

C: Although Erik Kratz was a pleasant surprise, it was tough for him and Ruiz to match Chooch's torrid first half, and production fell sharply after the all-star break.

RF: The same was true in Right Field, largely due to the departure of Hunter Pence. While Pence failed to meet expectations, his .781 OPS was not easy to duplicate after he left. Domonic Brown could have been worse (.698 OPS while in RF), but all non-Pence right fielders combined hit only .204/.281/.348 (.629 OPS).

2B: The switch from the light-hitting Freddy Galvis to one of the best-hitting second basemen in the game led to by far the biggest improvement from the first half to the second half.

In addition, 3B, SS, and CF all improved.