The projections from the Bill James model, which are probably on the optimistic side, translate to slight improvement over the 2012 offense.

The James projections have been rather optimistic in recent years, and that was the case again in 2012, at least for the Phillies regulars:

So the 2013 wOBA projections below are likely to be more optimistic than others that will follow over the next several weeks.

I made playing time assumptions and then converted the projected wOBA to runs created (using the Tango/Fangraphs wRC formula), given those assumed PA totals.

1) Each position will get the same number of PAs as in 2012
2) PAs to be distributed among 2013 players as below:
- 570+ PAs from both Utley and Howard
- Rollins and Young stay healthy and play almost the entire year
- without a Ruf projection, Mayberry is used as a proxy in Left
- Revere plays every game in Center
- Brown gets the bulk of the playing time in Right 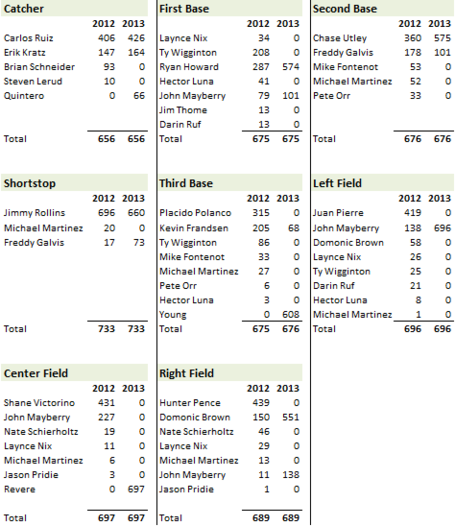 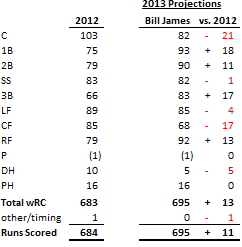 - Ruiz comes back to 2009/2011 levels
- Utley and Howard play the majority of the time and return to roughly 2011 levels
- Young improves on the 2012 hodge podge of third basemen
- Revere is the worst hitter in the lineup and falls short of Victorino/Mayberry's 2012
- Brown improves to a .792 OPS

- The James model didn't include a projection for Darin Ruf, so this is uses Mayberry as a proxy.

- Assumes Revere plays every game, and falls well short of the Victorino/Mayberry 2012 production.

The Ruf/JMJ line includes Mayberry's time at first, as well as any outfielders not named Revere or Brown.

Since FanGraphs removed base stealing from its wOBA, base running is not reflected in any of the above. I suppose it's among the many things included in the "1" that is the difference between the sum of the wRC's, and the actual runs scored in 2012, including timing/luck.

I would expect that with Revere replacing 2/3 of a Victorino season, and with Rollins and Utley a year older, it will be essentially a wash.

The Bill James projections are on the optimistic side and when combined with assumptions about playing time, work out to about 11 more runs than what the 2012 team scored.

However one factor that's pessimistic in these assumptions is using John Mayberry's overall wOBA. If he doesn't play full time he will likely face primarily lefties, which would improve his numbers somewhat.

The 2012 Bill James projections for the starting pitchers were not unusually optimistic overall:

Starters are projected to improve, mostly on the strength of Roy Halladay returning to form with a 3.21 ERA:

The bullpen gets a little trickier in that 2013 is limited by who does or doesn't have a projection. I've allocated innings as reasonably as I could given that restriction: 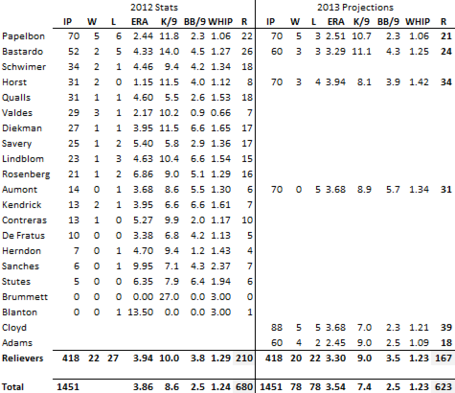 With projections for both runs scored (695) and runs allowed (623), we can now project a winning percentage: