The long time center fielder's tenure in Philadelphia officially came to an end in 2012 with a trade deadline deal to the Los Angeles Dodgers. We take one last look at Shane Victorino, no questions asked.

As the Phillies foundered well below the .500 mark in July 2012, trading assets seemed wise, and so it was that Shane Victorino, who had patrolled center field for the Phillies full-time since 2008, found himself shipped off to the Los Angeles Dodgers for reliever Josh Lindblom and pitching prospect Ethan Martin. It was an interesting and triumphant run for the Flyin' Hawaiian.

Since being acquired from the Dodgers in the 2004 Rule 5 draft, Victorino worked his way up from afterthought prospect, to 2005 International League MVP, to clutch postseason performer for the Phillies. His most memorable moment -- his 2008 National League Division Series Game Two grand slam off the "invincible" C.C. Sabathia -- was one of the defining moments in Phillies history.

The 2012 season was, probably coincidentally, the worst of Victorino's big league career, the free agent-to-be switch-hitter posting a combined line of .255/.321/.383 between the Phillies and Dodgers. After some speculation that the Phillies would look to bring him back into the fold for 2013 and beyond, Victorino raised some eyebrows in the baseball world, signing a three year, $39 million deal to play right field with the Boston Red Sox.

After a tremendous 2011 season, one that saw Victorino on the fringes of the MVP race until a late-season slump, many of us had hoped that he could not only hold on to his tremendous skill at hitting left handed pitching (like Sabathia), but that he'd hold onto some of the gains he made hitting righties. It wasn't to be. Victorino's platoon split turned into a chasm; a .906 OPS against lefties, .629 versus righties. He battled hand injuries early on that allegedly sapped his ability to swing left handed, but nonetheless, that's pretty bad.

Nevertheless, Victorino's time in Philadelphia will and should be remembered as one of unlikely success. Rule 5 draft pick turned full-time center fielder for a World Champion turned bazillionaire free agent. Here's to you, Shane.

Note: The standard "Exit Interview" questionnaire was sent to Shane Victorino's home after the conclusion of the 2012 season. Sources with the Phillies have leaked this letter, which Victorino sent to Amaro in response, leaving the questionnaire unanswered: 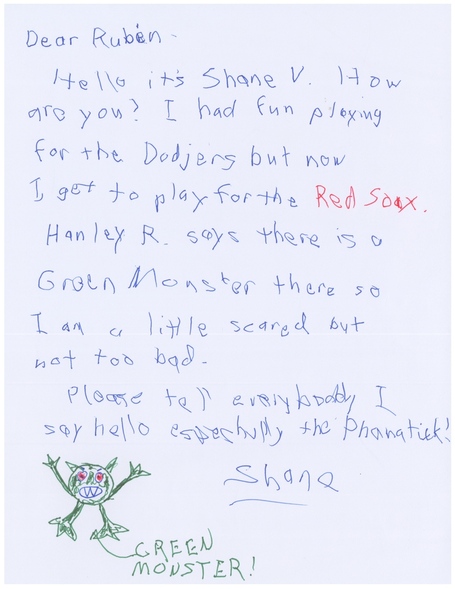