Share All sharing options for: Chase Utley and 50 Years of Second Basemen

1) Peak: where did the player rank among his peers in his best seasons?

2) Longevity: how do his career stats compare to those of his contemporaries?

In the case of Chase Utley, his longevity was already hampered by a relatively late start to his career, and it is now looking more suspect after injuries have caused him to miss time in each of the last two seasons. However we won't be able to judge his longevity fully for (hopefully) several more years.

Utley now has 7 full seasons that we can compare to the best 7-year stretches of other players.

The method used is to find each player's best 7-year stretch based on Wins Above Replacement. Since there are some differences between the WAR from FanGraphs (fWAR) and from Baseball-Reference (rWAR), the two were averaged.

So how does Utley match up with other top second basemen of the past 50 years?

First, any discussion of the single best second baseman of recent decades does not get far beyond the name Joe Morgan. For all his faults as an announcer and analyst, on the field he was the best second baseman since Rogers Hornsby, and one of the best players of the past 50 years at ANY position.

The question of the best second basemen therefore quickly becomes a battle for second-best, but it is a battle among some great players, including:

- three Hall of Famers: Ryne Sandberg, Roberto Alomar, and Rod Carew (who played second through his age 29 season)
- one likely inductee: Craig Biggio, who was a second baseman for most of his career after starting out as a catcher
- two who deserve consideration: Bobby Grich and Lou Whitaker

Without further ado, the best seven-year stretches by second-basemen in the past 50 years are shown after the jump.

Utley is 2nd in the averaged WAR -- 3rd in rWAR, just behind Biggio, and 2nd in fWAR, comfortably ahead of him: 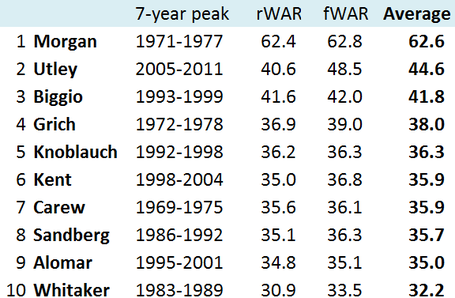 You'll notice that Utley has the biggest difference among these players between their rWAR and fWAR. The differences by segment of WAR are below. It's not clear why the differences are so large for Utley, but it's worth mentioning. Again, in either case, he's in the top three: 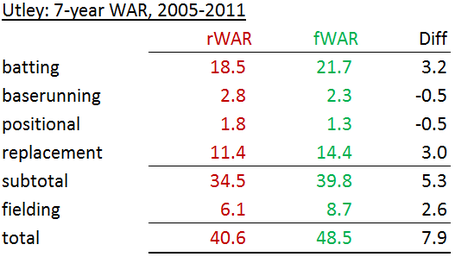 WAR needed for Utley to have the second best peak...

A look at Utley's marquee stats since 2007 gives the strong impression that he's been in steep decline for several years now:

Part of the apparent decline is because he missed time due to injuries. That is a very real issue, but if we examine how he did when he was actually on the field, it's a somewhat different story.

This normalizes each year to 700 plate appearances:

And the same table, but this time showing the top 10 in fWAR per 700 plate appearances:

So a couple of observations:

- In 2010, for the time that he was able to play, he was still the best second-baseman in the game. And it wasn't that close. He was also the 11th best position player in baseball.

- In 2011, despite the issues with his power, line drive rate, and so on, when on the field he was a 6-win player, and still a top-tier second-baseman.

There is real decline in his offense, but it looks even worse than it is because a) hitting is down across baseball, and b) casual observers conflate the decline in production with time missed to injury.

The graph below compares the best second basemen of the past few years. It will be interesting to see if any of the other three can maintain 6-8 win performance and challenge Utley's 7-year peak: 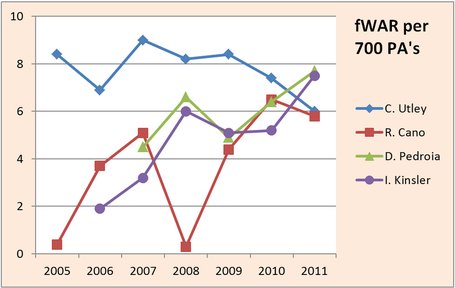 By the way, I can picture someone who is used to traditional stats, saying "Wha?! How could Utley have been anywhere near as good as Cano in 2011?"

- Playing time: this was a real advantage for Cano. He was on the field, and he helped his team. But if we adjust their stats for playing time, they are somewhat less lopsided -- 29 HR, 105 RBI for Cano, 17-68 for Utley -- although still a significant difference.

- Walks: getting on base is the most important thing a hitter can do, and because Cano hardly ever walks, they did that about equally in 2011: .344 for Utley, .349 for Cano. That factors into the comprehensive hitting stat wOBA, which weighs OBP about twice as much as Slugging, where Cano had a clear advantage. There is still a difference in wOBA -- because of his better power, Cano was clearly the better overall hitter last year.

- Defense: As mentioned above, Utley was great as usual, while Cano was average to slightly below average, as he has been almost every year. That is enough of a difference to negate Cano's hitting advantage, and in the end their WAR per plate appearance is about equal.

Getting back to the question of longevity, below are two possible career projections for Utley, showing where each would put him for his career. The first is optimistic, adding 27.5 WAR. The second (adding 15.5) may also turn out to be optimistic depending on his health, but at this point I would like to think it's realistic. 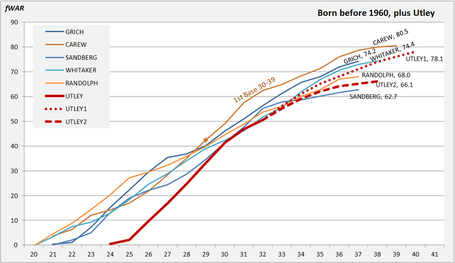 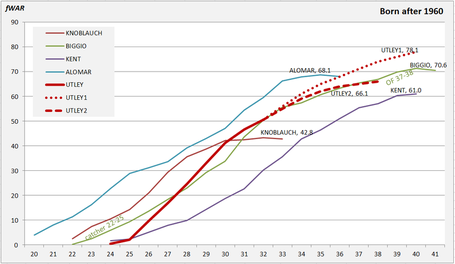 Career WAR rankings since 1961, with the two Utley projections: 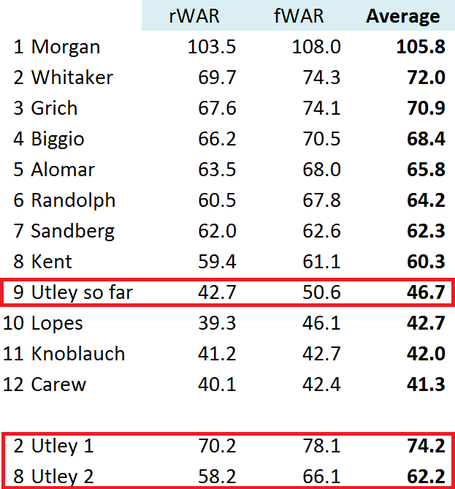 Chase Utley has had one of the best 7-year stretches by a second baseman in the past 50 years, and has a good opportunity to continue to be among the best for 8- to 10-year peaks as well.

Beyond that, the key of course will be how well he can manage his ailing knees and hips and continue to produce.