A Brian Schneider retrospective follows beyond the link, which I suggest you click, unless you are looking for hardcore analysis that tells you that Schneider is, at 35, going to hit better than he did when he was 34 and had an OPS of .502. That performance with the bat was worse than what Cliff Lee did with the bat. The only thing that prevented Schneider's rWAR from going below -0.7 was his limited number of innings played. But let's accentuate the positive, ok? Besides, he's a backup catcher.

Just pray that Chooch doesn't miss an extended amount of time, and we can just laugh, right? And click the link...

As you can see from this photograph, Brian Schneider is a viking: 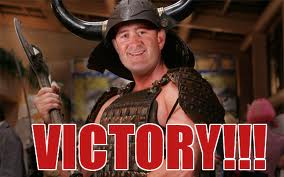 Vikings, throughout much of history, were winners. So is Brian. He wins. I was too lazy to look up "winz when Brian Schneider starts" but the Phillies were something like 28 - 8 when Schneider started in 2011, which is close to being totally unbeatable in baseball. Assuming, as I always do, that the internet comment thread I read the statistic on is accurate, the Phillies winning percentage with Schneider starting was .777. No, really, .777! That's all 7's! And it repeats infinitely, making an infinite force of 7 power, fueling the Phillies to VICTORY!!! I mean, look at the picture. It's full of win, right?

Schneider is also a bargain, possibly the biggest of all time. If you deconstruct the Phillies' record last year as 28 - 8 with Schneider, it follows that they were 74 - 52 without him -- a .587 winning percentage. That's as tight as any Taco Pal Logic Dome stuff you see around here! They should have been 21 - 15 in games with Schneider, so he single-handedly added 7 WAR for the team in just 36 games! That's MVP stuff, folks.

At $5 million per WAR, he's worth $155 million, but he agreed to sign for just $800,000.00 for 2012. That's because he's a good teammate and wants the Phillies to be able to pay other players, like Ty Wigginton and Laynce Nix. He knows that they needed jobs, and in a tough economy, everyone has to make sacrifices. Schneider's values remind all of us why we should look to the baseball diamond for moral and spiritual guidance.

He's obviously going to try extra hard this year for a new contract, so expect even bigger things from him. I hope Amaro has the sense to extend him before he hits the market, though. In fairness, it would be hard to justify a $155 million dollar contract, given the luxury tax and everything, but the Phillies should look at just signing over the Comcast money starting in 2015 to Schneider. I mean, he's totally worth it.

In case you forgot, Schneider is a winner: 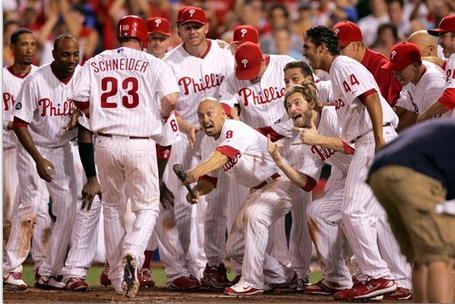 Of course, someone should crop that guy's khaki shorted butt out of the photo, but we don't get much money for the newsroom operations around here. Brian said he'd send some, though, if he gets a contract extension, because that's the kind of guy he is.

Want more win? How about this: 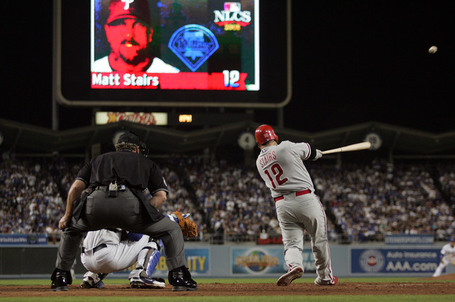 You may say, "But Brian Schneider wasn't on the Phillies in 2008, and, in fact, he played for the Mets!" You are right, but isn't this one of the most awesome photographs ever? Because it is "awesome" it belongs in the same group as "Brian Schneider." I mean, duh.

Bottom line on Schneider? Whistle as we walk past the graveyard of Chooch's health, and laugh at Schneider's truly awful 2011. Hope he bounces back, or better, hope that Schneider sees no more than 125 plate appearances. I'm sure he's a nice guy and all, but if Chooch misses a substantial amount of time, the Phillies may have to consider looking for help. Going into the season with Schneider as "Plan B" behind the plate makes me a little nervous. Catcher is one of the positions where the backups actually do play some, and it seems that a little less Laynce Nix and a little more anyone else (Travis D'Arnaud? Oh, crap...) might have been a good idea.