2012 Phillies Player Preview: Jimmy Rollins - How much more is left in the tank?

Share All sharing options for: 2012 Phillies Player Preview: Jimmy Rollins - How much more is left in the tank?

Whittling away at our mortality, most of us spend the salad days of our youth engaged in utterly worthless tasks that we later regret. Jimmy Rollins may be wondering now where those salad days have gone, but he's far from cooked, as his rebound in 2011 showed. Jimmy Rollins is a really hard player to project to begin with, and complicating the forecasting of his upcoming season is trying to figure out how many games he'll be able to play, and at what level of effectiveness.

The uncertainty is the result of the injuries he has sustained each year starting in 2008, his distinctiveness, and his advancing age. Perhaps the best that can be expected is to assume that he will sit out perhaps 20% of the Phillies' games, and hope for a repeat of 2011, when he bounced back to put up 3.7 rWAR following seasons of 1.0 in 2009 and 2.0 in 2010.

If he produces 3.7 WAR on his contract of $11M for the year, the Phillies will once again make out on one of the most-productive players in their history. Something between 2.0 rWAR and 3.7 rWAR seems more plausible, though, because of the injuries and his age-related decline. Those two caveats are obviously not mutually exclusive -- they are likely two sides of the same coin. The man is baseball old, but not dead. That just means to be realistic, not fatalistic.

Since the MVP season of 2007, there have been four seasons' worth of data for Rollins. During 2007 and previous seasons, he was good for 150+ games per year. Since then, he's played that number only one time. He's been valuable during that stretch, but nowhere near as valuable as when he was in the lineup all the time. Missing innings, both offensively and defensively, hurts him and the Phillies.

Where Rollins' durability used to be taken for granted, injuries should now be expected. For example, Chipper Jones is typically mocked in these parts for his fragility, yet he has played 365 games over the last three seasons. Jimmy Rollins has played 385. And Chipper Jones, who will turn 40 in April, is 6.5 years older than Jimmy Rollins.

In addition to the injury wildcard, I mentioned above that Jimmy Rollins has always been an odd player. He doesn't have many obvious comparables in terms of playing style, talent, and stature. Finding comparables to use to predict the rate of his decline is not easy. BR listed Alan Trammell as a comp, but that's not perfect. Rafeal Furcal? Nope. Anyone? I'm coming up empty.

He's generated a ton of runs using his legs - stealing with an outrageously high success rate, legging out doubles and triples, and using his legs to help generate the power that turns out 15+ home runs per year from a really small frame. Despite the obvious role that speed has played in his game, his BABIP has never been very high. At best, he's been around league average. As a "speedy" guy, it stands to reason that he'd convert more balls in play into more hits, but this doesn't seem to be the case over his career.

Despite that, It seems logical that his depressed BABIP over the last three years (significantly lower than league average and his historical level) has resulted in part from his leg injuries. I'll leave the BABIP analysis aside, other than the above suggestion that the decline in his BABIP may be leg-related. This is probably less from reduced speed than from linkages in his swing. Injuries to his legs perhaps reduce the power available from his swing, in addition to depriving him of foot speed. The 2011 bounce-back is encouraging, but it would honestly be very surprising to see Rollins beat league-average BABIP -- he hasn't done that since 2005, and six seasons of data are probably enough to validate the point.

Still, a low BABIP doesn't mean Rollins will have a "bad" year. Rollins generated lots of value in years when his BABIP was below league average, including the MVP season in 2007. BABIP plays a role in his value, but it isn't his entire game. As long as he has healthy legs, he can still steal with a high success rate, play above-average defense, and beat out some hits, as well as extend hits to doubles or triples, go first to third, avoid double-plays, etc.

A sign to watch for Rollins this year could be his walkability. A difference between subpar oWAR years like 2009 and 2010 (1.5 in each) and a pretty good year, like 2011 (3.0) is BABIP variability related to randomness and injury effects in addition to the ability to take walks, which has appeared to increase modestly in recent years. He's no Wade Boggs, but he's better at it than he was. If Rollins is not walking at a 8 - 9% rate this year, it is unlikely he will be having a good offensive year. This wasn't mandatory for him in the past, but with his reduced power, the OBP has to be there to keep him afloat offensively.

Illustrating this point further, Rollins' OBP was below .300 for the only time in his career during 2009. In 2010, in far fewer games and with a similarly bad BABIP, Rollins got on base at a .320 clip. In 2011, with a BABIP recovery and maintaining a higher walk rate (as compared to 2009, at least), Rollins' OBP bumped up to .338 in a declining offensive environment, and his oWAR doubled compared to 2009 and 2010. Here is Rollins' career walk rate graph. If I were smarter, I'd superimpose his walk rate over the BABIP, and you'd see clearly why 2009 was a train wreck for him, and why 2011 turned out so well.

A discussion about Rollins seeing the ball better seems to offer at least a marginally excusable opportunity to use one of my favorite Rollins photos: 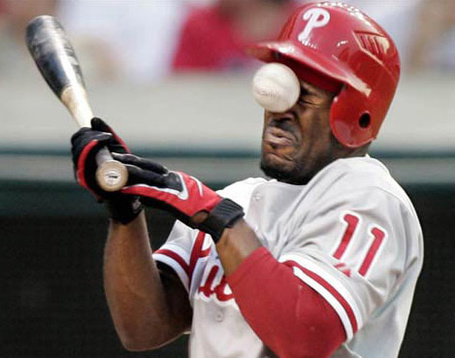 Again, if a walk rate of 8% - 9% is assumed, along with a reasonable BABIP of maybe .270 (below both his career average and 2011, but above his abysmal 2009), it appears he should put up a solid year for the Phillies. Here's why. In a declining wOBA environment, Rollins has improved his wOBA over the last two years, largely as a result of getting on base in other ways. If he can stay on the field for 140 games, play good defense, and get on base at a clip of .320 in the shortstop role, the Phillies will get a lot of value for their $11 million dollars this year, even if his ISO is significantly and irreversibly lower (and this is almost certainly the case).

In conclusion, the story for Rollins in 2012 is the same as with most players in the major leagues - stay healthy. It will be increasingly difficult as he gets older, but his 2011 may tell us something important - he can stay healthy anough, and when he does, he's still a very valuable player, even with eroded skills. And if his pace of decline stays reasonably linear over the current three year contract and he can provide even 60% of his 2011 rWAR in a season, it is likely that Rollins will outperform his contract yet again.