We're only ten games into the season, but it's worth a quick look at aspects of this team compared to last year.

More specifically, I'd like to compare this team's early stats to how they performed in the first 46 games of 2011, another period of offensive struggles while waiting for a key hitter to return. After that, Chase Utley joined the team, John Mayberry Jr. found his stroke, and Hunter Pence arrived and had a far better than expected final two months, allowing the team to lead the NL in scoring over their last 116, and run away with the division.

But for the first 7 or so weeks of the season, the 2011 Phillies struggled to score but were still able to post a .609 winning percentage. We hope that this year's team does as well before Utley and Howard return. 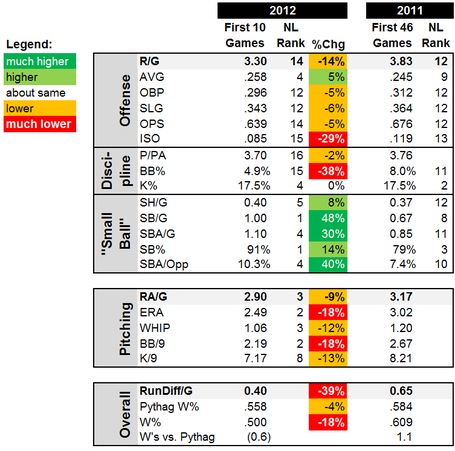 - Batting average is higher, but everything else, and particularly power, is down

- One of the hot topics of this off-season, plate discipline, is looking worse so far, with the K% unchanged, but the walk rate way down.

- Sacrifices are up, although not by as much as I expected.

- All of the Stolen Base stats are up substantially. (SBA/Opp is SB attempts as a percentage of opportunities, estimated as the sum of hits, walks, and HBPs)

- The pitching, so far, is even better than last year.