Two quick items in this edition:

- Update of various key stats, compared to the "pre-Utley" period of 2011

Not only are the Phillies missing two key pieces of their offense, but hitters are, by and large, not performing up to either their recent averages, or their 2012 projections.

- 2 of the 11 (Pence, Ruiz) are somewhat above where we would expect

- 2 more (Wigginton, Galvis) are at their projections, although Galvis is ahead of where many of us would have expected and could still see some regression

- 7 others are either somewhat below expectations (Pierre, Victorino, Rollins), or far below (Nix, Mayberry, Polanco, Thome)

It's probably fair to say we really shouldn't expect that much more from Pierre. But as for all the others, they really have one way to go, and that is up.

(comparing to the first 46 games of 2011, when the offense was near league-worst, before rebounding to lead the NL in scoring for the final 116 games) 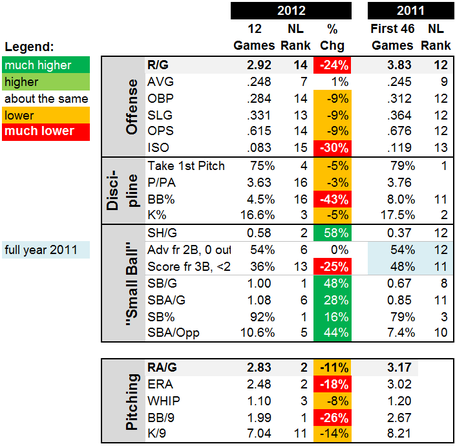 - Runs per game are back below 3, and the early advantage in batting average has disappeared

- I've added two "small ball" items: advancing a runner from 2nd to 3rd with none out, and scoring a runner from 3rd with less than two outs. Sample sizes are small with all of these, but particulary so with these two stats.

- Base stealing is far ahead of last year and still very efficient, with 12 steals in 13 attempts (SBA/Opp is attempts as a % of opportunities, estimated by adding together singles, walks, and HBPs).

- Still running ahead of last year's pace, which is remarkable, and almost certainly not sustainable