In the top of the first inning Sunday, the Phillies drew two walks, stole a base, and were the beneficiaries of two San Diego errors. They didn’t score a run, and the game got worse from there. In the end, the Phils endured a loss every bit as ugly as the camouflage uniforms worn by the host Padres.

Buoyed by their success the night before against Roy Halladay, the Padres quickly jumped on the considerably less imposing Joe Blanton with two first-inning runs on a bunt single, a Blanton error, a double and a sacrifice fly. Blanton surrendered two more two-spots in the third and fifth innings, both times after retiring the first two batters. In the third, he walked Chase Headley, then surrendered an unlikely triple to catcher Nick Hundley, who then scored when Jim Thome threw behind Blanton on what should have been a routine 3-1 play. In the fifth, Blanton walked Headley again, then gave up a two-run homer to Hundley. The catcher, who had entered the game sporting a .182 batting average, set a career high with four RBI on the day.

Meanwhile—this is not a recording—the Phillies offense generated nothing against unheralded San Diego starter Anthony Bass. It wasn’t a dominant Matt Cain or even Corey Luebke who stifled the Phils on this day; Bass pitched about as badly as one can in a six-inning appearance that yielded zero earned runs, walking five. But the Phils only scored once on him, and might not have managed even that but for Will Venable’s inability to cleanly field a Juan Pierre single in the second inning, allowing Carlos Ruiz to score from second. They stranded nine runners on the day.

Perhaps the emblematic inning was the top of the third, when Jimmy Rollins led off with a double. Hunter Pence followed with a weak groundout to third, failing to advance Rollins; Thome then struck out looking, and after Rollins stole third, Ty Wigginton ended the frame with a swinging strikeout. Pence finished the series 1 for 16, his last at-bat ending in an eighth-inning double play that erased a leadoff Rollins single (and was followed by singles from Thome and Wigginton), and defensively was questionably positioned on two Padres triples.

There’s just not much good to say about this team right now. Their offense is putrid, full stop. Their fundamentals are unsound—as seen by the three errors they committed, Pierre’s on-base adventures (he was picked off in the first after a leadoff walk), and a chronic inability to cash in scoring opportunities whether playing small ball or looking for the big fly. And, with Blanton scuffling, Cliff Lee on the disabled list, and a range of questions in the bullpen, the pitching is somewhat in doubt as well. With just 16 games played, it’s way too soon to draw conclusions about the 2012 season. But they’re not providing very much grounds for optimism. 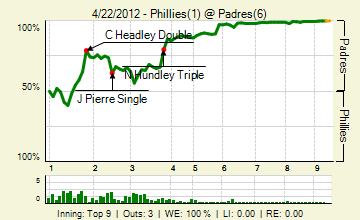