Items after the jump:

We've taken a look at performance vs. expectations before, but this vesion looks at the full year 2012 OPS forecasts from the four projection systems published at FanGraphs (ZiPS, Marcel, RotoChamp, and Steamer), and uses the lowest of the four for each batter. The table below compares their stats so far this year to that lowest projection.

We finally have a hitter far above their projections (Laynce Nix) to partly balance the several who are far below (Placido Polanco -- still, Jimmy Rollins, John Mayberry, and Jim Thome).

In addition, the two best hitters on this team (Hunter Pence and Shane Victorino) should get back to those projections, but I think most would be surprised if they don't exceed them and at least reach their 2009-11 averages.

It seems safe to say the team offensive stats shown in the next section will continue to improve even before Chase Utley and Ryan Howard return. 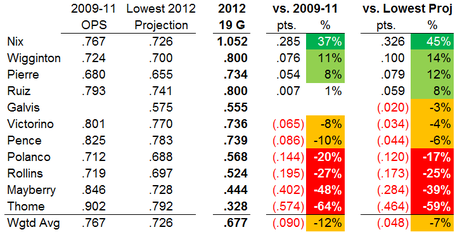 This shows what key batters have done in these first 19 games, per 100 PAs. For established Phils, and for the team as a whole, it also compares to what they've done over the past three years.

- Strikeouts are way up for Rollins, Pence, and Mayberry.
- Walks are down 4 points for the team, with big drops for Mayberry (8% to 0), Ruiz (12% to 5%).
- Victorino's doubles and triples are down, but he's replaced many of them with HRs
- And of course, Mayberry's HRs are down

- The recent 19-inning surge has lifted the Phillies' average runs per game to 3.32, which still lags behind early 2011 (3.83).
- The biggest decline from that period last year continues to be power, and particularly home runs, even after hitting 5 in the Arizona series. Lack of power in and of itself is not an issue, if it's made up for by lots of singles or walks, but there haven't been enough singles, and walks are few and far between.
- The Walk rate continues to lag far behind 2011. Pittsburgh (also 5.3% but a fraction ahead of the Phils) is the only other team in the NL to be below the Cubs' 7.1%. League average is 8.3%.
- Base stealing is still ahead of last year's pace but seems to have slowed a bit in recent games.
- For context, NL scoring last year was 4.12 per game through May 22nd (4.26 in April, 4.02 in May). This April so far it's been 3.94, down 5%.

- Phils' pitching has now given up slightly more runs per game than in early 2011, but it's entirely due to unearned runs. ERA is still even better than last year's (note, by coincidence, the 2011 ERA through 46 games was the same as where it finished for the year -- 3.02).
- Last year the Phillies gave up only 7 unearned runs in the first 46 games. This year they've given up 8 already in the first 19.
- That seems to be a product of the flawed Error stat and "Earned Run" calculations, because the Phillies' defense is, if anything, much better so far this year. If the fielding stats are to be trusted (very small sample), the Phillies lead the NL in UZR so far with 8.4, thanks in large part to Freddy Galvis (4.3), and Placido Polanco (2.9). In both those cases, at least, the visual evidence matches the stats. Last year the Phillies were 9th.

- At 6-13, the Cubs are just ahead of San Diego for the worst record in the NL, but they do have the worst run differential.
- There haven't been many teams worse than the Phillies offensively, but the Cubs might be one of them. The only offensive category where the Cubs have been doing better is in actually pushing across runs.
- They've hit only 7 home runs, tying Mike Napoli for 3rd in the majors. 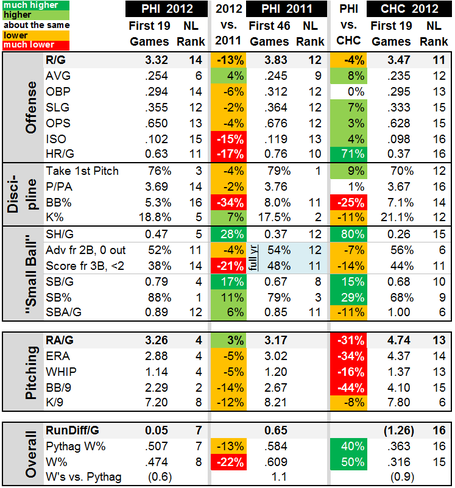 Below are the NL standings, with additional key stats. The idea is not to study every number on this busy table, but you can get a quick sense of which team is doing well in each area by quickly scanning the colors: e.g. Atlanta is near the top in offense and about average in pitching in the early going, St. Louis is near the top in everything, while LA is above average in many categories, and great in some. This is fairly automated and I plan to do something similar periodicallly.

(I considered using more advanced stats, but for various reasons, primarily laziness, I'll start with this for now and consider adding some FG stats as the season progresses). 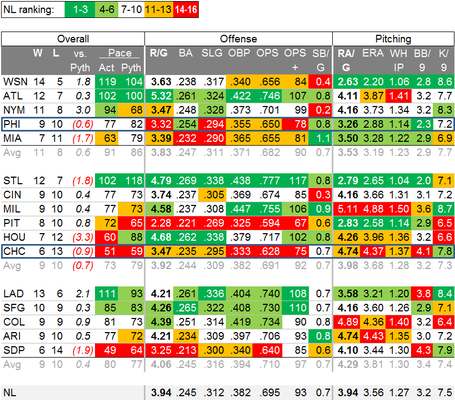 Juan Pierre
- his next stolen base (4th of the year) will tie him with Brett Butler for 21st, at 558