Opening Day found the Phillies in Pittsburgh, where the Phillies have been tortured during recent seasons. With spring giving even the cursed Pirates hope for renewal, Roy Halladay took the mound. Clearly inspired by the love and admiration of his legions of fans, Halladay started the season off with a gem.

Halladay went 8 innings today, giving up 2 hits, 0 walks, and striking out 5, including Nate McLouth to end the 8th inning. There was some question about whether Halladay might pitch the 9th inning, having thrown only 92 pitches. Perhaps wanting to test drive the Shiny New Thing or perhaps out of concern for the cumulative effects of years and pitches, Charlie Manuel brought in Jonathan Papelbon at the top of the 9th for a 3 out save.

Halladay was never really challenged at all, except perhaps in the first inning, when he allowed two singles to start things off, with the second hit of the "swinging bunt" variety. After inducing a ground ball double play from Andrew McCutchen, Halladay got a fly out from Neil Walker, and ended the first without any nicks.

The lack of stellar strikeout numbers may conceal the death by smothering that the Pirates suffered today. Aside from the first inning "excitement", the only notable Halladay weakness was seen in (perhaps) the two batters he plunked, the last being in the eighth inning, perhaps leading to Manuel's decision to send Papelbon out in the 9th.

If you recall the pitching line above, Halladay gave up two hits. Both were in the first. He walked nobody. He hit 2 batters. He pitched 8 innings. That means that after the first two batters he faced, he did not allow a hit or walk for the next 25 batters that he faced. Dominant? Oh, yeah.

Halladay didn't win the game by himself -- the Phillies had to score at least one run. They did. One. Let's hear it for third order wins! Right? How, you may be wondering, did this Phillies offense manage to score even one run?

The much-maligned Phillies offense (and the season *just started*) scored only one measly run. I'll get to that, but first, Offensive Award of the Day goes to Freddy Galvis, who played a solid second base. Freddy: you will have better days than today, I promise. But today was not a good one: 5 plate appearances, and no hits. One strikeout. Five men left on base. And two GIDP. Oy vey! It gets better, Freddy.

To be fair, the Phillies faced a version of Erik Bedard that had things going pretty well. He went seven innings, giving up 6 hits, walking 1, and striking out 4. It's hard to blame Bedard for this loss if you are a Pirates fan, because he pitched well enough to win most games.

In the seventh inning, the Phillies broke through. With one out, Ty Wigginton hit a single. John Mayberry followed up with a double, setting up the speedy Wigginton on third. Carlos Ruiz followed up with a sacrifice fly to right, and Wigginton scooted home, sliding in with the winning run. Galvis then hit a ground out, ending the threat.

The Phillies offense could use some work, but they did get 8 hits. Carlos Ruiz, in addition to the sac fly, had 3 hits. John Mayberry was 2-4 with the double that helped get Wigginton around the bases, and he played a pretty good left field. Wigginton's hit and run scored were not his only highlights -- he made a nice grab on the throw from Polanco to secure the 27th out of the game. 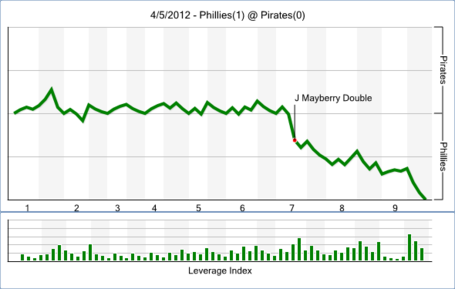 Also, after the game, David Cohen pointed out to me that Halladay's performance today was eerily similar to his performance in this game. Is this where we go to an alternate universe? Baseball's a funny game, isn't it?