Charlie Manuel and the Phillies are struggling to find the best way to field an effective lineup in the absence of both Ryan Howard and Chase Utley. Below are a few proposed options, predicated on the idea of putting the best hitters on the field, according to their platoon splits, and using wOBA as the metric. I could have just easily used the flawed, but simpler, OPS, and reached the same conclusions.

I'm using splits from 2009-11 to get a somewhat larger sample, but one more recent than simply using career stats. Using only 2010-11 would not change results appreciably.

The concern here is primarily with getting the right hitters in the lineup, and less so with how they should line up, although I do make an effort to put them in a reasonable order.

Right-handers represent about 3/4 of all pitchers. 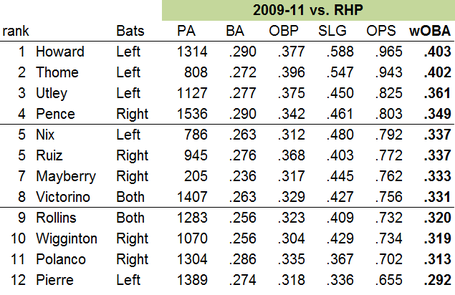 Proposed lineup 1 (when Jim Thome can play First Base):

This is the preferable lineup, but is only feasible as often as Thome is able to play First Base.

Leadoff: vs. RHPs, Victorino does not offer much of an improvement over Rollins, and I would rather have Rollins where I think he is more comfortable.

#3: Could easily flip Pence and Victorino, but I prefer Vic's speed higher up.

Left Field: John Mayberry Jr's stats are heavily skewed by his strong second half of 2011, so using him here ahead of Laynce Nix assumes that he can maintain close to this level. If he continues his Spring struggles, this would have to be revisited.

Galvis: I've included a rough prediction which assumes he hits better vs. RHPs, as he did in 2009-10 (2011 splits are not available as far as I can tell).

Proposed lineup 2 (when Thome is not playing):

Pence moves up to cleanup, Mayberry moves to First Base, and Nix is inserted somewhere in 5-7. 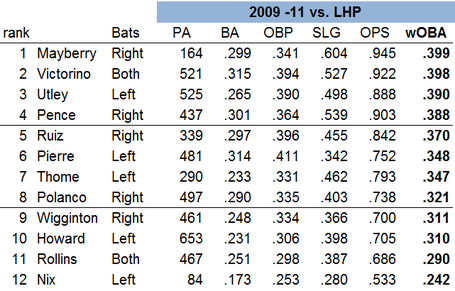 Leadoff: Juan Pierre should be playing against Lefties, due to his reverse split. He has been very effective against LHPs, but essentially useless vs. righties.

Rollins: I know, there is no way Manuel is going to bat Rollins 7th, so another option would be to hit Polanco 7th, Victorino 2nd and Rollins 3rd. But 7th is where he belongs vs. lefties, at least by traditional lineup theory which gives the weakest hitters the fewest at bats.

Finally, regardless of the lineup they throw out there, they won't average 2 runs per game over any extended stretch, and this weekend's ineptitude should be as bad as it gets.