Share All sharing options for: Quick Update: Phillies vs. Different types of pitchers

If you remember, I had a couple posts back in Spring Training, covering the Phillies struggles vs. aces. Well, 24 games into the season, I've decided to see if the same trends are present with this team. Clearly, this team has been scuffling on the offensive side of the ball, but have they struggled against good pitchers in particular, like they had last year? To find out, let's check the graphs.

Quick primer: The four graphs refer to ERA, K%, BB%, and BABIP, and compare how the Phillies did against how the league has done in 2012 against the groups of pitchers. I also broke down the starting pitchers the Phillies faced, but into three different groups this time, good starters, average starters, and bad starters. The "average" starter group is actually all either average or below average, as there was a decent break between the end of the good starter group and the start of the average group. I also determined these groups slightly differently, and rather than go with one of ERA, FIP, and xFIP, I went with an average of the three, and weighted each pitchers' 2011 statistics more heavily than their 2012 statistics.

Before anything, remember that we are taking about 24 games here. All the numbers here could be subject to massive swings by the end of the season. But, ignoring all of that, let's analyze it anyway. Okay, onto the graphs. 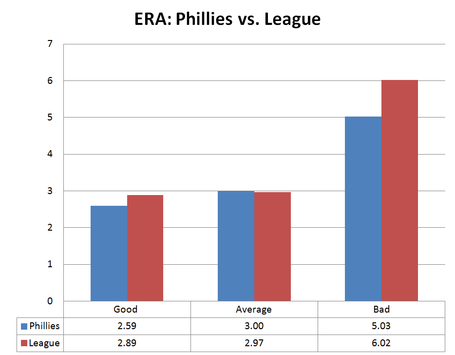 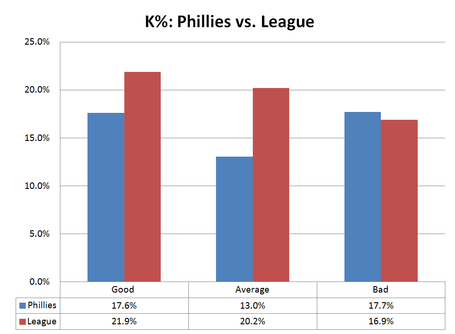 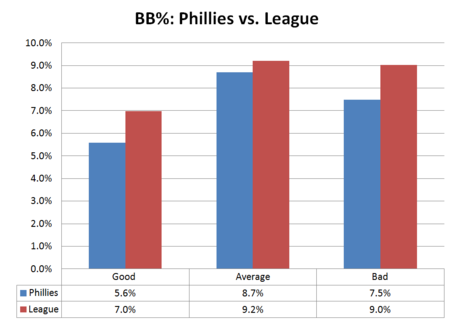 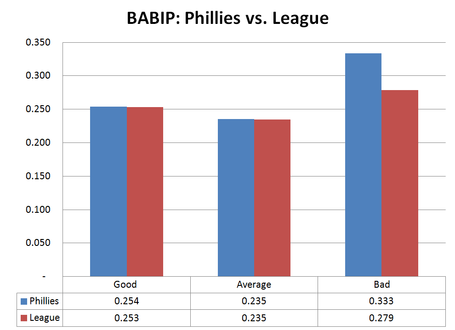 This year's Phillies have apparently switched up which type of pitcher they'd struggle against and which one they'd succeed against. Though they are slightly below average against good pitchers, they've actually been closer to average against them than they are overall. It's the truly bad pitchers that they've "struggled' against. They strikeout more against these bad pitchers than they do against the good or average ones, while walking a mediocre 7.5% of the time. It might just be noise, or it could be explained by the absence of Ryan Howard, who last year crushed bad pitchers while struggling against average and good pitchers.

As for BABIP, the Phillies have had a BABIP equal to the league for both good and average pitchers, and one well above the league against bad pitchers. However, as the BABIP of these groups will regress back towards league average (though not completely, as low ERA pitchers have lower BABIPs on average), it indicates that the Phillies and the league should improve against both good and average pitchers. At the same time, if things don't change, the Phillies will actually do even worse against bad pitchers, as their BABIP against them regresses back towards the league average.

Again, it's far too early to draw any conclusions, but looking back at the first 24 games, the Phillies haven't struggled against aces anymore than they've struggled overall. Given the stark difference Howard had against them last year, his absence could be the cause, or the addition of Nix, Galvis, Wigginton, and Pierre could explain it. Or it could just be statistical noise. Whatever the cause, it looks like last years massive split may have just been an aberration.