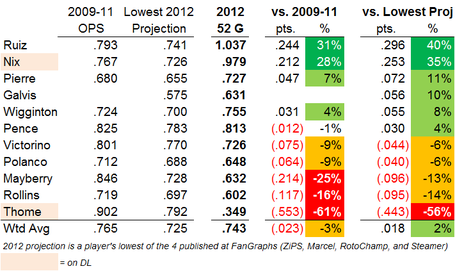 CHOOCH LEADS ALL MLB HITTERS IN MAY

In May, Carlos Ruiz led all MLB hitters in:

HUNTER PENCE: SEASON TO DATE, AND THE 7 BANDBOXES

Pence is often lumped into the list of Phillies hitters who have underperfomed so far, along with Shane Victorino and Jimmy Rollins (and when people remember, John Mayberry Jr).

This is partly due to his dismal performance with runners in scoring position, and with men on third and less than two out:

But his overall stats are right about where they should be:

His lower batting average is offset by a higher ISO, caused by a much higher than usual HR/FB%:

While he seems to be popping up more, FG and BB-Ref agree that he's not doing so any more than his career average.

Rather than being unlucky, it seems that his BABIP is caused by his batted ball profile, and in fact if he's had any luck at all it's been of the good kind, as reflected in the higher HR/FB% rate mentioned earlier. The knee jerk reaction among some will be to attribute that to playing more games at CBP, but in fact it's been much higher on the road:

He has hit more home runs since last July's trade, but that is in spite of his performance at home rather than because of it. He has 5 HRs at CBP (193 PAs), and 17 on the road (268 PAs) since joining the Phillies. 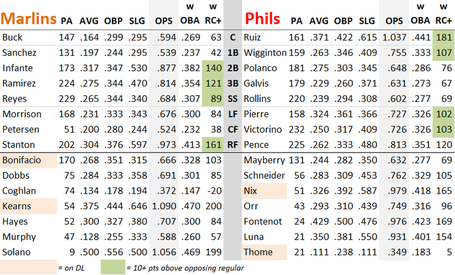 Phillies Team Stats vs. early 2011 and vs. Marlins

At roughly the 1/3 mark of the season, let's review two areas discussed ad nauseum during the off-season: plate discipline, and manufacturing runs via small ball:

Working counts: this can be split into two parts:
1) Getting to good counts -- they were already very good last year, and have been almost as good this year, with the 2nd lowest first-pitch swinging, and the 8th most situations with hitters counts
2) Being patient in those counts -- the Phils were near the bottom in this last year, as they typically looked for a pitch to drive rather than work a walk, and have been even a little worse this year, with the 3rd lowest rate of pitches taken in those counts.

Stealing bases: very similar to last year, and still the highest success rate in the NL.

Moving runners:
- sacrifices: unfortunately, this is the one thing they've succeeded in changing -- up 18% over last year, and consistently near the top in the NL
- advancing runners from 2nd to 3rd with no outs: same as last year, around the NL average
- Baseball Refernce also reports something called productive outs, and the Phillies, like last year, have been just below the league average

Scoring men on third with less than two outs: The Phillies as a team are dead last in the NL in capitalizing on these situations. And of the 79 NL hitters with 8 or more opportunities, this is where Phils hitters rank at getting the run home (including 3 of the worst 7): 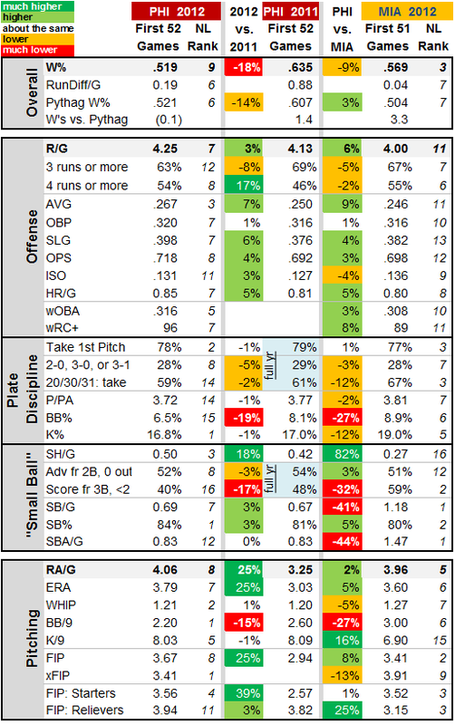 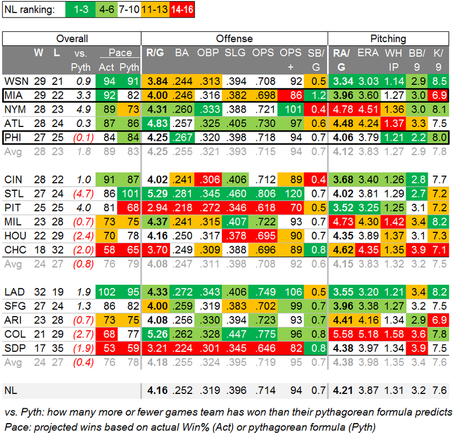 - Needs 4 more stolen bases (14 for the year) to tie dead-ball era outfielder Sherry Magee for 3rd on the Phillies' list at 387, behind Billy Hamilton (508) and Ed Delahanty (412). In fact Rollins has been the Phillies' leader for the post-1920 era ever since he passed Larry Bowa's 288 back in 2008. Surprising perhaps, but Richie Ashburn only stole 199 with the Phillies, partly because he played in an era where there was much less stealing. He led the league once, in his 1948 rookie season, with 32.