I've never been a huge horror movie guy. When I was a kid, I was on the timid side, and they scared me; as I got a little older, I came to appreciate the original "Halloween" as a well-structured genre flick, "The Exorcist" and "The Shining" as serious cinematic accomplishments, and the first "Scream" as a clever-enough subversion of the form. Then when I was around 30, they started pumping out the "Saw" franchise, every year around Halloween. I think I only actually watched the third one, on DVD five or six years ago, but I enjoyed reading about them for the interesting fusion of total genre predictability and impressive creativity in coming up with baroque ways to kill characters.

You see where this is going: the Saw franchise is no more, but we have the 2012 Phillies, who show what seems to be endless creativity in new ways to lose ballgames. Just as the Saw flicks carved (and slashed and gouged) out a niche in the splatter sub-genre of horror, the Phils specialize in weird late-game and free-baseball collapse scenarios. Today the beneficiaries were the Toronto Blue Jays, who join any number of other heretofore struggling teams this season to get well at the expense of the five-time NL East champs.

Seemingly dead in the water trailing 5-2 going into the home eighth, facing a presumably fresh Cliff Lee (83 pitches) closing in on that ever-elusive first win of the season, the Jays got started when Lee walked Jose Bautista. Edgar Encarnacion followed with a single to left... which wound up scoring both men when Jimmy Rollins, throwing to second to nail Encarnacion, misfired by about fifteen feet to send the ball down the right-field line. Kelly Johnson followed with a single to shallow center, ending Lee's day.

Enter... Chad Qualls! The meatball specialist got a pop-up from Yunel Escobar, but allowed a slow single through the right side to David Cooper, putting men at the corners, and then a rocket double down the line by J.P. Arrencibia that scored Johnson to tie it at 5. Then, failing to finish the collapse and essentially ensuring I'd waste another half hour of my time--it's surprising how bored one can get watching a snuff film--Qualls induced two flyouts to strand the men in scoring position.

Fast-forward two innings; you certainly didn't miss anything resembling offense from the Phils. Joe Savery is in for the 10th, with right-handed batters stacked far as the eye can see and Jonathan Papelbon resting comfortably in the bullpen like every sheriff who rolls his eyes at your story of chainsaw-wielding psychos in that abandoned warehouse. Walk to Escobar, balk to send him to second, groundout advancing him to third, strikeout to prolong the agony, get ahead 0-2 on Rajai Davis (nice touch, that)... and a gapper that sends the Phillies to their eighth walk-off loss of the season. 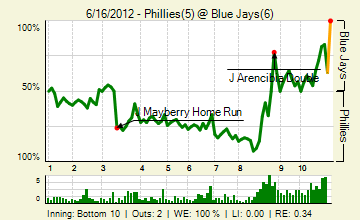