When home runs were flying out on Tuesday and even Michael Martinez hit one, even some who konw that Citizens Bank Park is essentially neutral voiced the opinion that the park plays like a bandbox in hot weather. However the stats don't seem to support that. Below are home runs hit (by both teams) at CBP in each month in 2008-2011.

There is no indication that hot weather boosts home runs, and in fact if we compare the two cooler months (April-May) with the two hottest months (July-Aug), there have actually been more homers in the cooler months. Adding in June and September makes the two groupings essentially equal in home runs per game. (50-60 games per month is a rather small sample for this type of analysis, and we gain some level of confidence by combining into two- or three-month groups) 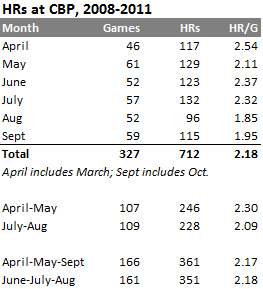 So how does this compare to home runs in the Phillies' away games? If anything, relative to other parks CBP is slightly more homerun-friendly in April and May, when the Park Factor of 1.10 shows there have been 10% more home runs per game at CBP in those months. Again, adding June and September makes CBP equally home run friendly relative to other parks in the cooler and warmer months. 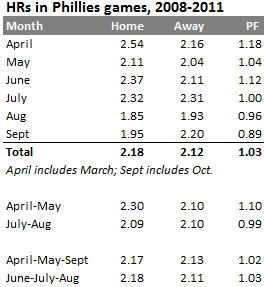 After closing the gap for three straight years, 2012 is not going well for the senior circuit. NL teams are 90-120 in interleague play, a .429 winning percentage. Their pythagorean record is better, but only slightly, at .438. 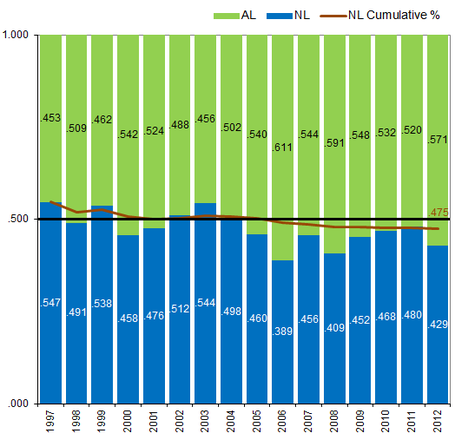 Shane Victorino is now the Phillies position player who is the farthest below his preseason projections. 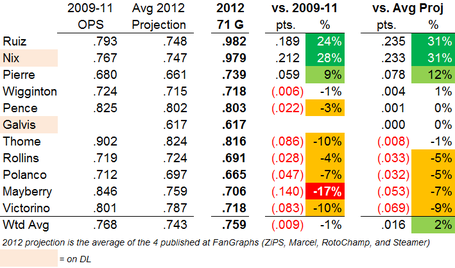 The table below now compares to the full season 2011 stats.

Offense
The offense so far this year has been remarkably similar to that of 2011 overall, with the only real difference being that this year's team is replacing walks with hits (both singles and doubles), and ending up with essentially the same OBP.

Another aspect that has continued from last year is that they attempt among the fewest steals in the league, while being the most efficient at it, and in fact succeeding at an even higher rate than last year. In addition, while the Phillies' two leading base stealers, Victorino and Rollins, rank 6th and 13th in steals, among players aged 30 and over they rank 1st and 3rd (Angel Pagan is 2nd).

Pitching
It's been discussed endlessly, but it's still remarkable how dominant the pitching was last year, and in particular the starting rotation. The Phillies had the lowest team FIP in spite of a bullpen with the 3rd highest FIP. 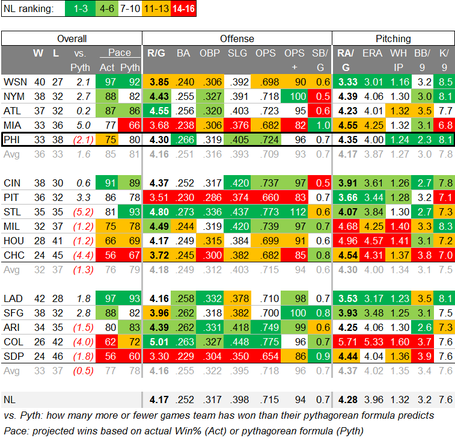 As the Starting Pitcher Goes (at the plate), So Go the Phillies

One of the most overused bad stats in the game tells us that the key to victory this season is for Victorino to hit a home run, Polanco to drive in another run, Galvis to get a walk, and the pitcher to get a hit and score a run.

Obviously a pitcher is more likely to get a hit or score a run the longer he is in the game, which usually means he's pitching well (not to mention that the opposing pitcher may not be having a good night).

- Last Thursday against the Twins, Rollins passed Richie Ashburn for 3rd on the Phillies list in Runs Scored, and now has 1,118. Still ahead are Mike Schmidt (1,506) and Ed Delahanty (1,367).

- Needs 3 more stolen bases (14 for the year) to tie dead-ball era outfielder Sherry Magee for 3rd on the Phillies' list at 387, behind Billy Hamilton (508) and Delahanty (412). In fact Rollins has been the Phillies' leader for the post-1920 era ever since he passed Larry Bowa's 288 back in 2008. Surprising perhaps, but Richie Ashburn only stole 199 with the Phillies, partly because he played in an era where there was much less stealing. He led the league once, in his 1948 rookie season, with 32.

Jim Thome
- Thome's 4th HR of the season on Sunday was the 100th with the Phillies. He joined Reggie Jackson, Alex Rodriguez, and Darrell Evans as the only four players in history to hit at least 100 for three different teams.
- His next HR will tie him with Sammy Sosa for 7th on the All-time list with 609.
- His next walk (8th this year) will tie him with Mickey Mantle for 7th on the All-time list in that category as well, with 1,733.

Shane Victorino
- Appearing in 7 more games (78 total) will make it 1,000 for his career. He needs 43 to become the 37th player to appear in that many with the Phillies.