Items after the jump:
- Why is the pitching so much worse this year?
- Phils batters vs. projections
- Phillies stats vs. 2011, and vs. Miami
- NL Standings and team stats
- Milestones: Rollins, Victorino, Hamels, and Papelbon

Why is the Pitching so much worse?

The Phillies have allowed about 90 more runs this year than they would have at this point with 2011's team ERA. Why is that? I've taken a crack at categorizing the increases/decreases in runs allowed by comparing ERA, FIP, and xFIP (as well as unearned runs) in 2011 and 2012.

Below are stats by pitcher in the two years (Oswalt's 23 starts and Blanton's 8 are combined in 2011):

And this is how the changes in the various rates translate into higher or lower runs allowed in 2012: 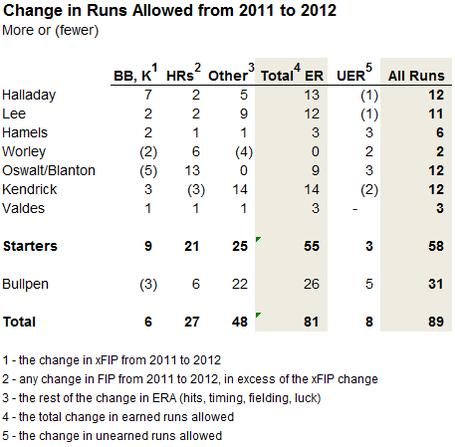 The change based on xFIP alone (i.e. based on BBs, Ks, and a league-average HR/FB rate) is minimal.

48 more runs cannot be explained by FIP, and can be attributed in large part to an increase in BABIP against, from .286 to .302. 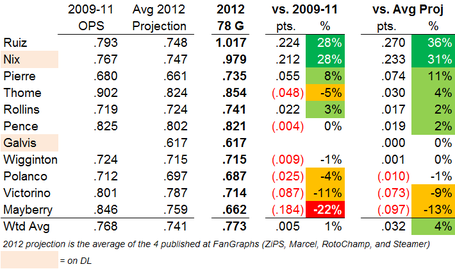 The table below now compares to the 2011 full season stats. Also, the color indicators for pitching were changed so that throughout the table, green typically means better, while orange/red means worse. 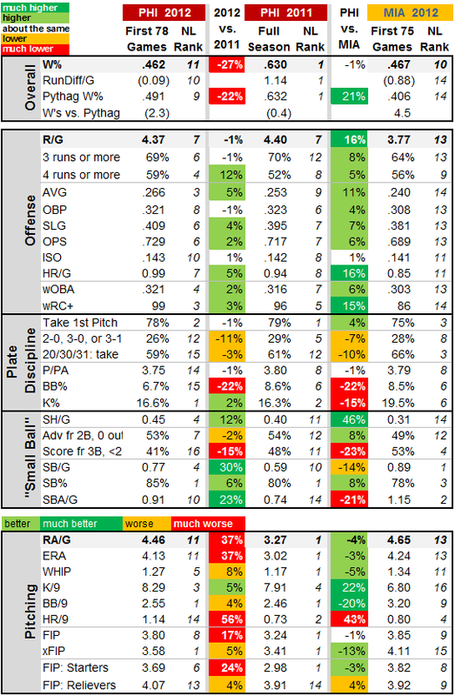 Miami is a half game ahead of the Phillies in spite of having somewhat worse pitching, and much worse hitting. 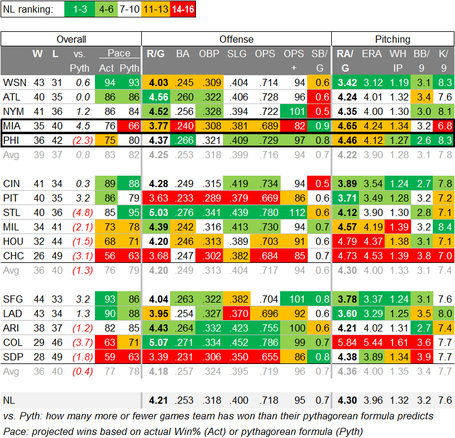 - With his triple on Wednesday, Rollins tied Ed Delahanty for 2nd on the Phillies list in Extra Base Hits, with 686. Schmidt is out of reach at 1,015 (30th all-time).

- Rollins' next stolen base (14th for the year) to tie dead-ball era outfielder Sherry Magee for 3rd on the Phillies' list at 387, behind Billy Hamilton (508) and Delahanty (412). In fact Rollins has been the Phillies' leader for the post-1920 era ever since he passed Larry Bowa's 288 back in 2008. Surprising perhaps, but Richie Ashburn only stole 199 with the Phillies, partly because he played in an era where there was much less stealing. He led the league once, in his 1948 rookie season, with 32.

Shane Victorino
- Vic played in his 1,000th career game yesterday. He needs 36 more to become only the 37th player in history to appear in that many with the Phillies.