I'm sure there's some Marlins fan out there who's cast The Avengers with players from his favorite team. Is there any doubt but that he's got Carlos Zambrano as The Hulk? Like the green-skinned behemoth, Zambrano is a talented guy historically prone to some rather extreme anger issues and the odd ensuing rampage. But whether his secret is yoga, controlled breathing, a big bag of weed or the calming presence of manager Ozzie Guillen, Zambrano has kept his cool thus far through 2012. And the only thing he destroyed today was the Phillies' hopes of drawing closer in the NL East, as the big right-hander crushed his 24th career home run and threw 7.2 strong innings to lead Miami to a series win.

Playing the ineffectual Loki to Zambrano's superhero was Joe Blanton, who lost for the third time in his last four starts. Blanton surrendered solo homers to Zambrano and Hanley Ramirez, but avoided further damage until the seventh inning. The Marlins' 7-8-9 hitters loaded the bases on a walk, a soft single and a bunt single--that was Zambrano--before Jose Reyes doubled in two runs and ended Blanton's day. A Chad Qualls wild pitch scored Zambrano and helped further balance the mix of tragic and farcical.

What's that, you ask? Did the Phillies bat in this game? Why yes, they did. They registered six hits, three by Juan Pierre, whose sixth-inning bunt double past third baseman Ramirez was the team's only extra-base hit. Pierre drove in their only run with an eighth-inning single. 3-4-5 hitters Hunter Pence, Hector Luna, and Shane Victorino were a combined 1 for 11 with four strikeouts. 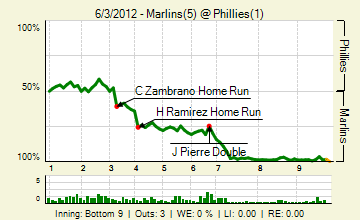