Items after the jump:
- Interleague play: is the NL closing the gap?
- Phils batters vs. projections: Vic and JRoll going in opposite directions
- Carlos Ruiz and plate discipline
- Orioles stats: run differential worse than Phils'
- Phillies stats vs. same time in 2011
- NL Standings and team stats
- Milestones: Thome, Pierre, Hamels, and Rollins (including where he'll rank by the end of his contract) 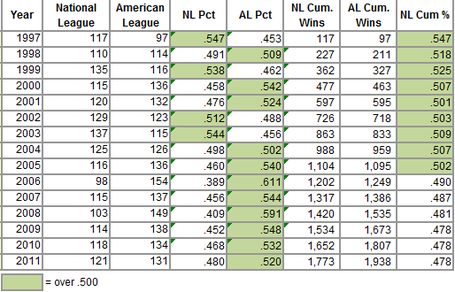 This year did not start well for the NL, losing 24 of the 42 games in the interleague preview in May.

Instead of comparing to the lowest of the 4 projections published at FanGraphs, this table now compares to the average of the 4.

Jimmy Rollins has been hot lately (Phils' best hitter over the last 10 games), to the point where in terms of how they're doing relative to projections and recent history, he has nearly caught up to Shane Victorino. 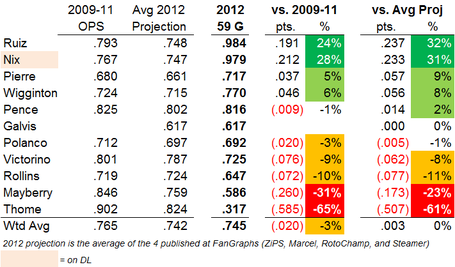 Ruiz has slowed recently but is still around the 1.000 OPS mark. As some have pointed out in recent threads, Chooch has been swinging at anything close this year, a sharp departure from his past approach at the plate:

(also, doesn't really fit but included above, his HR/FB has skyrocketed in the early part of the season)

The surprising Orioles are in a tie for first in an AL East where only 3 games separate all 5 teams. That's despite a negative run differential and pythagorean record (-4, .492) which are slightly worse than the Phils' (-1, .498). The Orioles have been a kind of mirror image of the Phillies, winning more than they should, including going 10-5 in one-run games (Phils are 5-10).

Both their runs scored and their runs allowed are squarely in the middle of the pack in the AL. Their offense combines below-average OBP with above average power, and their K rate is the highest in the league. And while their ERA is ranked 4th at 3.73, their run prevention is average overall because they're tied for the most unearned runs allowed.

Baltimore hasn't announced their starter for Saturday yet, but Tommy Hunter appears most likely at this point. All three Orioles starters are RHPs, so expect to see Jim Thome get lots of at bats. 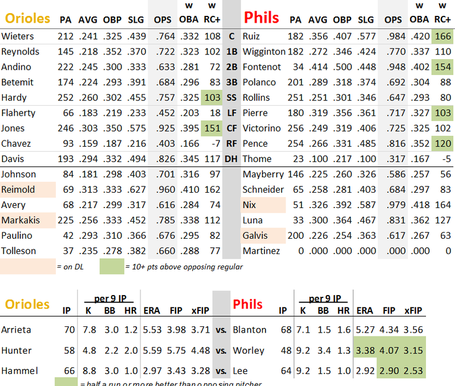 As David S. Cohen's article nicely lays out, the Phillies have scored about the same runs as they did at this point last year, but have given up 20% more.

The plate discipline stats, with the exception of their league-best strikeouts, are getting worse rather than better. It took a 3-walk game yesterday to stay just ahead of the Pirates for the worst walk rate.

The East's dominance is slightly less pronounced than it was before the last set of series, but it's still clear:

The difference is even bigger when you only look at games outside their own division: 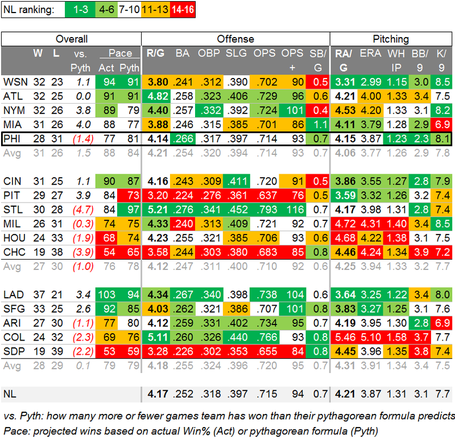 Below is how I project Rollins to move up the various lists, assuming age-related decline and about 130 games per year through 2015 (the option year of his current contract). He will likely finish as the Phillies' all-time leader in At Bats, Hits, and Doubles: 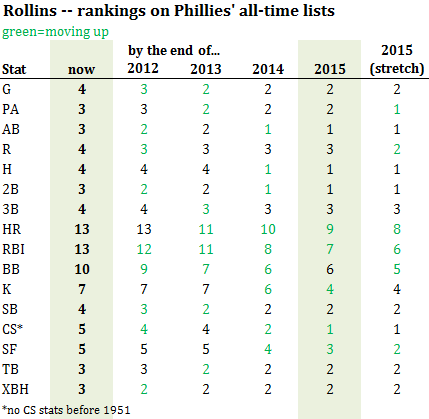