Items after the jump:
- Draft success since 2000 (redux)
- Phils batters vs. projections
- Phils Runs Created by Position vs. 2011
- Phillies stats vs. 2011, and vs. the Rockies
- NL Standings and team stats
- Milestones: Rollins, Hamels, Papelbon, and Citizens Bank Park

Given the way this season has gone so far, some fans are expressing dissatisfaction with how the Phillies have drafted in recent years, even when accounting for the trades that heavily weakened the farm system.

The table below shows how many players from each team's drafts since 2000 have reached the majors (and gotten some minimal playing time -- 30+ innings or 100+ at bats). It also shows the number of players who have become more or less regulars, with 300 or more innings, or 1,000+ at bats (the cutoffs are arbitrary and may need adjusting to be more meaningful, and any suggestions there are welcome; also, all stats are through 2011).

The Phillies don't look good on this list, but that may be just a much a function of drafting philosophy (e.g. raw, "toolsy" high ceiling high schoolers, vs. more polished but lower ceiling college players, to over simplify). The list is as much about how quickly prospects can make it to the majors as the ultimate value of those prospects.

Position Players
Since 2000 the Phillies have drafted 3 players who have now batted at least 1,000 times in the majors: Chase Utley, Ryan Howard, and Michael Bourn. That "3" ranks 22nd in the majors. Widening the search, they've drafted another 5 who who have had at least 100 at bats -- Carlos Rivera, Jason Jaramillo, Lou Marson, Jason Donald, and Domonic Brown. The total of 8 position players ranks 28th (and the at bats by all draftees rank 20th).

Summary
1. The total of 21 players who have gotten some minimal playing time (30+ IP, 100+ AB) is tied for last in the majors.
2. Perhaps more importantly, the number of Phillies draftees who have made some impact (8) ranks 19th.

Again, I think that's interesting, and speaks to draft philosophy, but I want to emphasize that it's too early to judge these drafts. 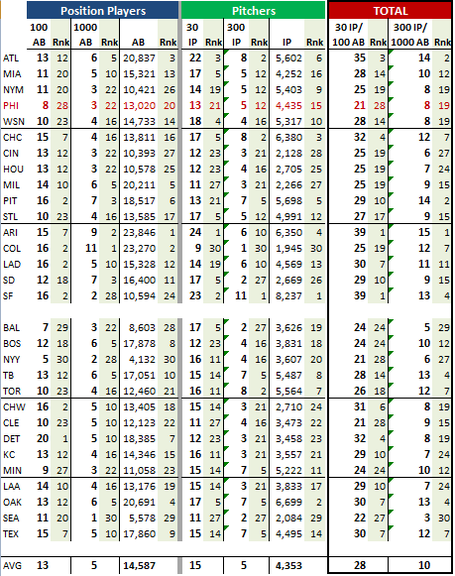 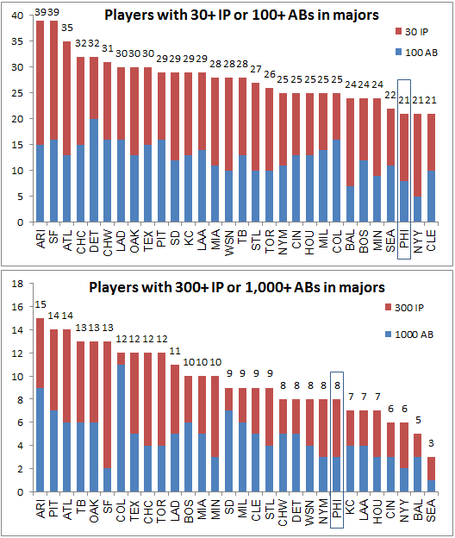 If the Phillies' low rank here is due to drafting less polished players, you would think that if you only look at the older drafts they should have relatively more players reaching the majors by now. And that is born out -- the graph below shows the cumulative totals of Phillies draftees since the 2000 draft reaching the majors (100+ ABs or 30+ IP), compared to the average of the 30 clubs. The Phillies were below average all along, but the gap has widened with the more recent drafts: 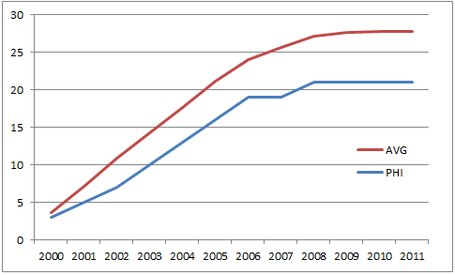 Obviously some are over and some are under, but overall the Phillies have slightly outperformed their OPS projections thus far. 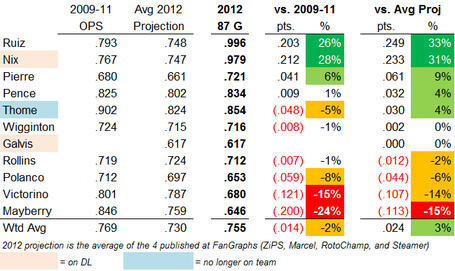 The totals below are runs created by position, using the formula originally developed by Bill James.

Chooch (and a bit of Schneider and Kratz) have created the same number of runs so far as Phillies catchers created in all of 2011. The infield (35 fewer runs), no surprise, has been a black hole, offsetting all of the gains at catcher and then some. The outfield has been essentially the same as last year, down 4 runs. And Jim Thome's impact is very visible at DH. 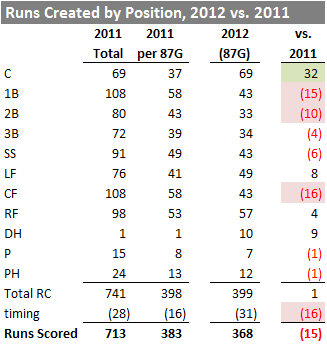 Phillies Team Stats vs. 2011 and vs. Colorado 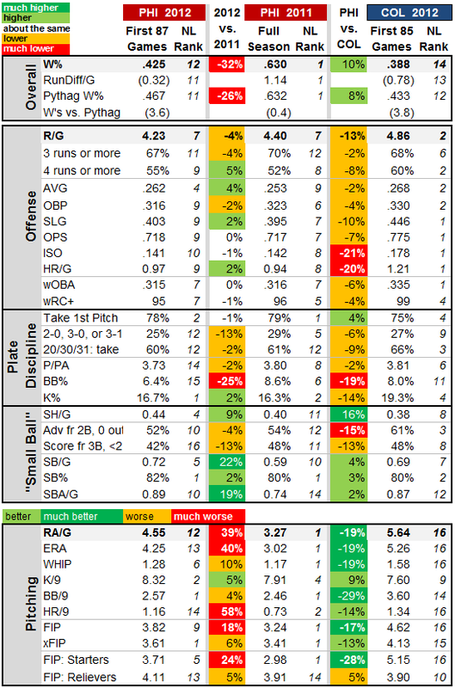 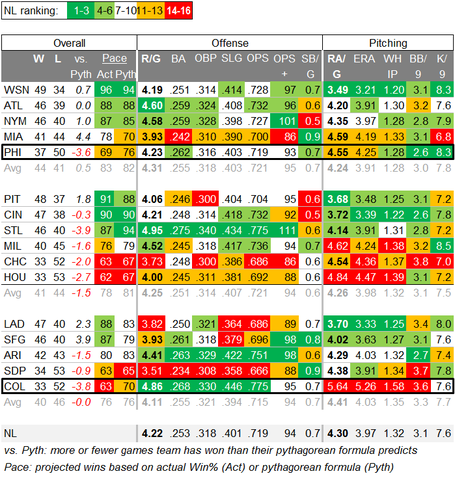