Items after the jump:
- Phils batters vs. projections
- Phillies stats vs. 2011, and vs. the Giants
- NL Standings and team stats
- Erik Kratz and Immortality
- Milestones: Rollins, Victorino, Pierre, and Halladay

Phillies Hitters vs. Projections
.
This now includes OPS over the last 30 and last 7 days: Chooch is not showing any signs of slowing yet. And Victorino may be heating up.
.
Utley and Howard have also been added to the list.
. 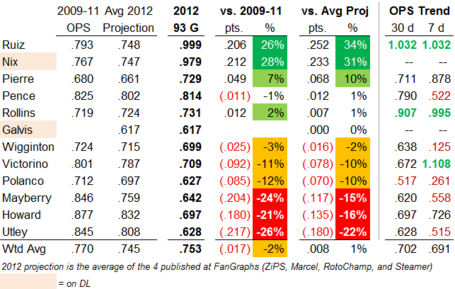 Phillies Team Stats vs. 2011 and vs. the Giants

The Giants have a 2 1/2 game lead in the West, the worst division in the NL. Their offense is below average (10th in wRC+ and wOBA, 11th in runs per game). Their plate discipline is almost as bad as the Phillies' (13th in BB%, 12th in getting to hitter's counts). They run a lot, with the 3rd most attempts (and steals) in the NL. One measure that says their offense is better than this though is an OPS+ of 101, which suggests that BB-Ref is applying more of a park adjustment than FanGraphs is.

However their pitching is very good, with the 5th lowest runs allowed per game (4th in ERA and ERA-), and FIP and xFIP which are 3rd and 7th, respectively. 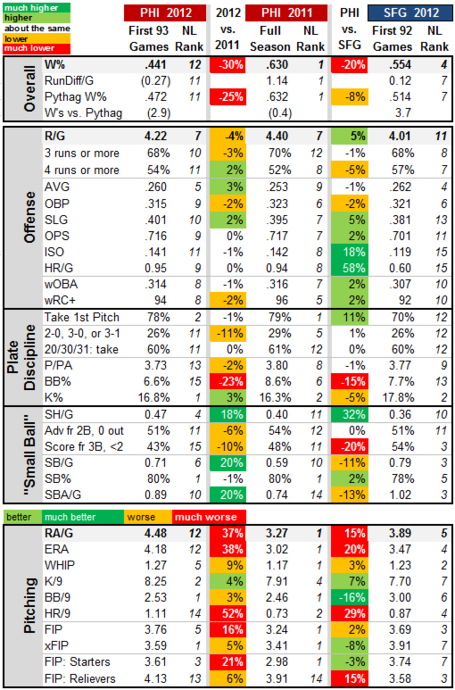 The Giants have won about 4 games more than their run differential would predict, thanks in part to a 20-14 record in 1-run games. 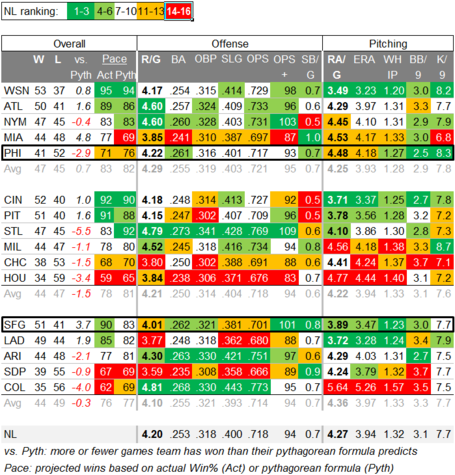 Erik Kratz has two hits this season, and as you probably know they were both home runs. What you may not know is that if he doesn't get another hit this year, he would become just the second player in history whose only two hits in a season were homers.

The only other player to ever do that was also a Phillie, Robert Person in 2002. And of course, he hit both of his in the same game.

One other note, Chris Carter of the A's has 9 hits this year, and 5 of them are homers.

Jimmy Rollins
- His next home run (10th this year) will tie Willie Puddin' Head Jones for 12th on the Phillies list with 180.