The Phillies snapped a seven-game home losing streak and avoided a sweep at the hands of the Giants with their personal seven-leaf clover: a win in extra innings (their third in 12 tries) at Citizens Bank Park, where they improved to 18-29 this season . Among the heroes were two players who might not be with the team in two weeks’ time: shortstop Jimmy Rollins and starter Joe Blanton. Rollins--who, for the record, pretty much should not be traded unless Mike Trout is coming back--delivered the game-winner with a first-pitch single off Giants long man Brad Penny, following a Carlos Ruiz walk and a single from newly activated Laynce Nix.

In what might have been his last start as a Phillie, Blanton gave a performance admirably representative of his season: constantly around the strike zone and victimized by the home run. In eight innings of work, Blanton held the Giants to seven hits and a walk while striking out six. But two of the hits were solo homers to Nate Schierholz, the second of which tied the game at 3 in the eighth.

The pleasant late-game twist was four innings of strong relief from the much-maligned Phillies bullpen: with Jonathan Papelbon unavailable, Antonio Bastardo struck out the side in the 9th, and Jeremy Horst and Kyle Kendrick made it through the 10th before Kendrick put up two more zeroes, stranding a leadoff double in the 12th and ultimately earning the victory.

The earlier hero was John Mayberry, Jr., who notched his second career two-homer game, connecting twice off San Fran starter Barry Zito to first tie the game at 2 and then give the Phillies a 3-2 advantage. Chase Utley accounted for the Phils’ first run with a first-inning triple that drove in Shane Victorino, another trade candidate. Old bullpen nemeses Javier Lopez, Sergio Romo and Jeremy Affeldt and former Marlins righty Clay Hensley kept the Phillies off the board through the 11th, but for once the home team’s relief corps matched them out for out. 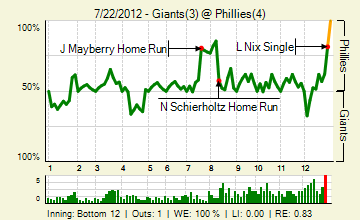