Share All sharing options for: NO MORE LOSSES: Phillies 7, Brewers 6

We needed today. Scratch that, we needed the past four days.

Whatever else happens with the rest of the season, at least we have today - a fourth-straight last at-bat win; a third walk-off win in the last four; a series sweep; a third-straight 7-6 win; and, rather than trading him or some other key piece to this team, signing Cole Hamels.

We fans have suffered this season, and we may suffer some more going forward, but these four blissful, entertaining, and rewarding days as Phillies fans - you can't take that away from us.

In case you didn't watch, listen, or read about this game and can't figure it out from the intro, the Phillies beat the Brewers, once again in dramatic fashion. Details and yet another glorious Fangraph after the jump.

With that description of the game, you know the details aren't going to be pretty. It started out gloriously - Vance Worley was cruising, and the Phillies scored 5 early runs. Eric Kratz knocked in the first one, proving that all he does when he hits is create runs (more on that later). Chase Utley knocked in three others on two doubles, and Hunter Pence had another hit with a man in scoring position, accounting for the other run. Through 5 innings, the Phillies were up 5-1 and things looked good, even 2011-esque.

But then we were all reminded that this is 2012, not 2011. Worley fell apart in the sixth, allowing 2 runs and leaving with 1 out and men on second and third. Kyle Kendrick, in pursuit of Orel Hershiser's consecutive scoreless inning streak, came on and saved the day. (Yes, I really typed that series of words.) He got the final two outs in the sixth without giving up a run and pitched a scoreless seventh as well, turning the 5-3 game over to Antonio Bastardo in the 8th.

And then more of 2012 happened. Bastardo gave up a single to Carlos Gomez and then faced Ryan Braun with 2 outs and a man on. Ryan Braun, righty, against Antonio Bastardo, lefty. Ryan Braun, MVP. Ryan Braun, NL home run leader. Ryan Braun, the man who crushed a ball to tie the game.

After two punchless at bats for the Phillies and a Papelbon scare in the top of the 9th, extra innings were upon us. And even more of 2012 happened. Michael Schwimmer gave up a run thanks to a Ty Wigginton error and a sacrifice bloop (is there a stat for that?) that scored Gomez. The Phils were down 6-5 going into the bottom of the tenth.

But in this short run, that didn't matter. The golden score of 7-6 was within reach, and the Phillies grabbed it thanks to their run-producing catcher duo and the franchise's best-ever shortstop. John Mayberry worked a walk, and was followed by a double from Eric Kratz, putting men on second and third with one out. When Carlos Ruiz emerged from the dugout to pinch-hit for Schwimmer, the outcome of the game was a foregone conclusion. Ruiz hit a long sacrifice fly to tie the game, and Jimmy Rollins followed with a gapper to win it.

Another 7-6 victory. Wins cure all ills. We can forget that each game of the past four involved shaky pitching. What we can remember, instead, is that over the course of these four amazing days, the Phillies thrilled us with their comebacks and their commitment to their homegrown star.

And maybe, just maybe, we can also remember this as the start of an improbable run to October. 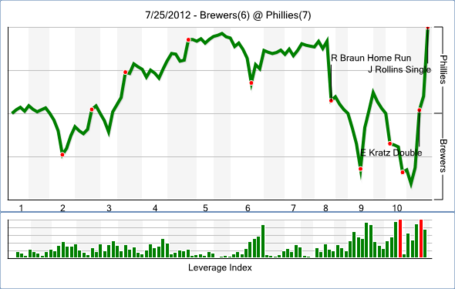