An expanded version of the milestones section that typically appears in the Stat Notes articles.

After the jump:
- Rollins' assault on the Phillies record book
- Howard's race to 300 home runs
- Halladay on the verge of 2,000 Ks
- also Victorino, Utley, Pierre, and Kratz

- He's higher on the Caught Stealing list, since CS's weren't tracked before 1951. Five more (9 total) will tie Bert Campaneris for 5th all-time at 199.

Vasquez is included because he hasn't officially retired. He pitched for the Marlins last year and was 8-3 with a 2.15 ERA in the second half, and was even named NL Pitcher of the Month in September (5-0, 0.71). But he's not playing this year and is not planning to play any time soon. More from Rob Neyer.

Erik Kratz
- His home run on Tuesday not only began the Phillies' remarkable comeback from a 6-1 deficit, but also allowed him to briefly join an elite group of only 4 other players who had three hits in a season with all three being home runs. Alas he wrecked it all with his first-inning RBI single on Wednesday and then compounded the error with two doubles, including one in the 10th which became the winning run.

Looking ahead it only gets tougher, as he will need to average one per 4.0 games to be the fastest to 350 and one per 3.4 for 400 (Mark McGwire was the fastest to each of those marks).

Below are some of the fastest to reach these milestones. I think I have at least the top two in each case, but beyond that there's a chance I'm missing someone.

Fewest At Bats: Howard broke Kiner's records for fewest At Bats to 100 and then 200 home runs. However he fell behind Harmon Killebrew's record for fewest ABs to 250, and already has more At Bats than the number Babe Ruth needed to reach 300. The records for 350 and 400 are also out of reach, as he would need to average a HR every 7.2 and 8.1 ABs, respectively. He's averaged one per 13.2 for his career.

Below is a summary of how his ranking on various Phillies career lists is expected to progress through the vesting year of his current contract (2015), assuming age-related decline, and 133 games per year on average: 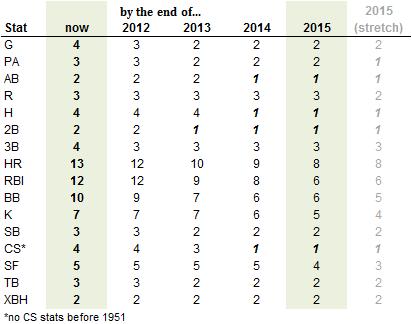 And the top 5 for selected stats: